When our Filipino hero fought Ricky Hatton last May 2, I penned an article that morning entitled, “MP’s secret is spelled MP.” In that piece, I elaborated saying that MP’s success formula—apart from his speed and muscle—is his mental backbone. Mind Power. That’s MP’s MP. I likened his psychological tenacity to Tiger Woods’ and Rafael Nadal’s.

Manny’s smile. Yep. That’s it. That’s MP’s oracle. That’s the bayonet he holds to obliterate the enemy. His smile. Think about it. Doesn’t Manny smile more than the usual athlete… than the usual boxer? 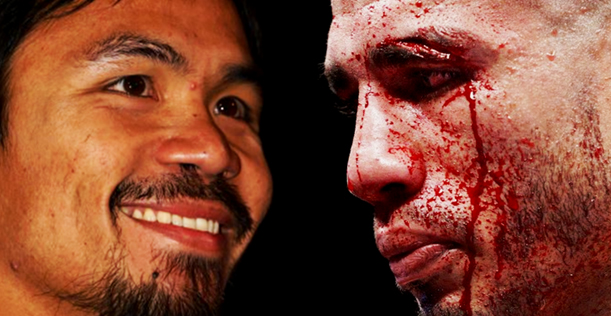 Because, if we stereotype boxers, aren’t they supposed to frown, smirk, pierce angrily and look treacherous? All the time? Aren’t boxers supposed to look scary? Intimidating? And not smile? Yes. But Manny smiles. Unlike many. And Manny wins. Unlike many.

So here’s the secret we all know about our prized Filipino possession: He looks happy. On his face is a grin—not a growl. He’s cheerful and merry. Unlike most “tough guys” who look ugly with their perennial frowns.

Haven’t you noticed that in most boxing fights, when the pugilist enters the Las Vegas arena, he looks grim, serious and, to borrow, the Lady Gaga song, “Poker face?” Wanting to look nasty, didn’t we witness Oscar de la Hoya entering the boisterous stadium never-smiling?  Didn’t we see this in Ricky Hatton? And don’t we observe this I’m-tough-therefore-I-have-to-look-mean look?

Not MP. With Manny, entering the MGM Grand stadium, he’s like a child—with dad and mom on both sides, with his relatives behind him—about to enter Disneyland! He’s eager. He’s bouncing. He’s energetic. He’s smiling.

Maybe it’s also because it takes only 17 muscles to smile and 43 to frown—that this proven statistic helps Manny weaken his gloomy-looking opponents.

Take the Jimmy Kimmel Live show in Hollywood, of which MP was a guest a few days ago. Did you watch it? If not, you should—go to YouTube. Throughout his 11-minute interview and song number (“Sometimes when we touch”), Manny is jumping on his chair, beaming a toothful cheer. MP smiles.

On another occasion earlier this week, he did the same. Quoting the Phil. Star article, “Media Day Workout: Happy Manny exudes confidence,” of Abac Cordero last Nov. 6, “Manny Pacquiao grinned from ear to ear and oozed with confidence Wednesday as he faced the media at the Wild Card Gym here. ‘I can’t wait for the fight,’ declared the reigning pound-for-pound champion.”

How about MP’s enemy? “Miguel Cotto’s own media day, which took place Tuesday at the Pound4Pound Gym here in Los Angeles, paled in comparison,” wrote Cordero. “For one, it looked like Cotto left his smile in his training camp in Las Vegas. Miguel hardly smiled at the gym yesterday and here he was looking so happy, Pacquiao was told.

“’Ganoon ba? Pag-bigyan niyo na. Nagre-reduce yun eh (Is that so? Let him be. He’s reducing),’ said the 30-year-old icon who looked so comfortable he can tip the scales anytime and make limit of 145 lb.

“Except when he did four rounds with the mitts with Freddie Roach, Pacquiao did smile most of the time, gladly fielding questions, and even putting his arms around the Tekate girls with bodies enough to warm up the gym. Obviously, Pacquiao had no worries in mind the whole two hours he looked like he was doing a commercial shoot.”

What does this tell us? This simple fact: Smile. MP does it. MJ does it. You and I should do it. We should smile. More. Because when we do, it makes us feel good—and when we feel good, don’t we perform better? Quoting a Japanese proverb: “One who smiles rather than rages is always the stronger.” 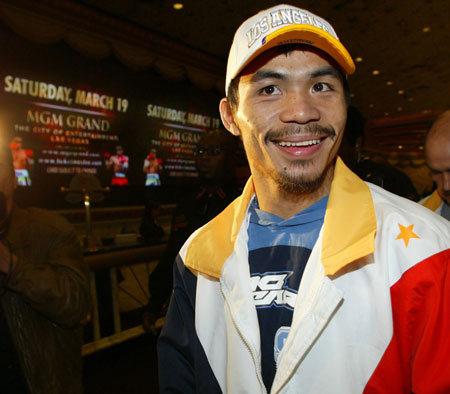