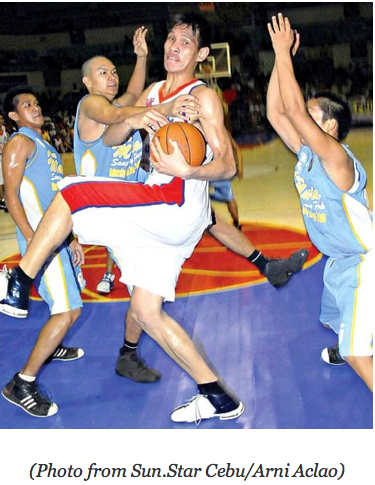 When I spoke to the two-time reigning CESAFI MVP yesterday, Greg Slaughter corrected me. “Are you ready for the match-up of the two tallest men in Cebu?” I asked. “You mean the two tallest players in the whole Philippines!” answered Greg.

Oh, yes. Greg Slaughter is Herculean. He stands 7-feet-tall. Jun Fajardo (above photo) is gargantuan. He’s 6-foot-9. In the history of Cebu basketball—and possibly of the entire Philippine collegiate basketball—this is the most sky-scraping and towering of contests.

Think about it. One is mammoth; the other, monstrous. One is a behemoth; the other, a leviathan. When one extends his arms upwards to the Cebu Coliseum ceiling, he nearly touches the 10-foot-tall ring. When the other stretches his arms sideways, it’s like seeing a Jumbo 747 jet’s full wingspan.

Can you imagine Greg and Jun, one backing up to score, the other, defending? One slamming a dunk; the other, blocking a skyhook? This is dramatic and breathtaking. Unlike anything we have seen before in Cebu.

“For Greg, this is a major challenge,” said UV head coach Elmer “Boy” Cabahug, when we spoke yesterday noon. “Unlike the previous years when Greg was able to dominate, this season, he has a counterpart in Fajardo. He has someone na kapareha niya (who’s his equal). 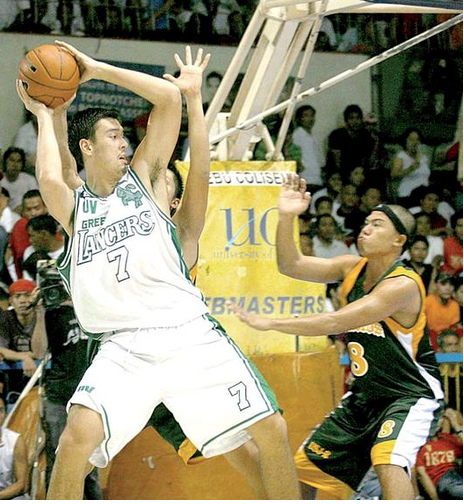 “Greg has improved. But, this year, he chooses his opponents if he’ll play well or not. Unlike the past two years when he overshadowed everyone, this season, only when he’s met stronger and bigger opponents did he show his true, dominating self.”

Jun Fajardo? “He’s also developed a lot. I just hope he’ll be as confident playing in the finals,” said Cabahug. “On my part, we have enough exposure to championship games. And, lahi ra gyud ang pressure sa finals. You’ll see players who are afraid to receive the ball. It is during the finals when makita nimo ang kasing-kasing sa players. In Tagalog, they say, ‘pusong-mamon.’”

Coach Boy recently had a one-on-one talk with his star player. “I told Greg, ‘Let’s see if you can still get the MVP award this season. It might be difficult.’”

Greg’s mature reply? “Don’t worry, coach. What’s more important than the MVP is the championship.” That impressed his coach. Plus, Greg added, “I’ll also go for the Finals MVP.”

This UC versus UV quarrel will be an irrepressible confrontation. There’s the electricity of the “Twin Towers.” There’s the Green Lancers aiming for their ninth straight CESAFI title. There’s the UC Webmasters targeting an upset win for their first trophy. And, of course, there are the tens of thousands of UC and UV students. Can you imagine how boisterous and ear-splitting the Cebu Coliseum will be later today?

Here’s another intriguing fact: In the only time they met this season, UC beat UV. That was in the league’s first game when UC won 75-73.

“That was our only loss,” said Cabahug. “Same as last year. We also lost in the very first game against USC—and we went on to beat them in the finals. So I hope it will be a repeat this year. Also, that UC loss has given us an extra challenge. I told my players, ‘better to lose the game early than in the championship.’”

I admire Boy Cabahug. Not only for his achievements as a PBA player and as UV coach, but also for his humility. He doesn’t boast. He doesn’t gloat. You can see it on court. You can sense it speaking to him.

“I keep myself rooted on the ground,” he said. “With Coach Al (Solis), and especially with the support of the Gullas family, we try to prepare our players to be the best they can be. In the beginning of each year, we talk to them one on one. I tell them, ‘You’re lucky to be a Green Lancer. You’re joining a team that has a lot of history. So ayaw pag-dako ug ulo.’ Because if they do, we either suspend or kick them out.”

Any predictions on the Finals ‘09, I asked? The coach laughed. It’s the same question I’ve asked him the past years. “We are aiming for our ninth. No matter how many games it takes, we will prevail.”

Jun Fajardo and the University of Cebu, obviously, think otherwise.

So… Hercules or Goliath? Take your giant pick. 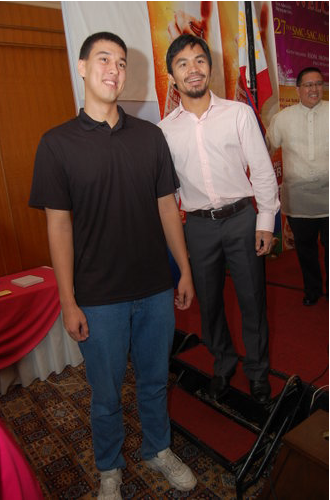