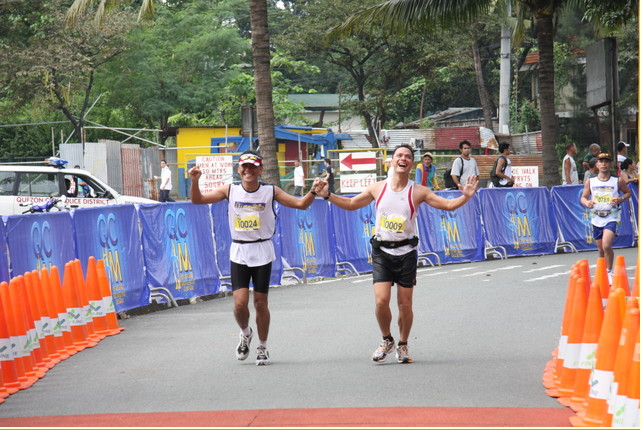 That’s me and Bro. Carlo Bacalla meters from the finish

Jesse Taborada, a veteran of six 42K marathons, calls it, “The hardest marathon in the world!”

Of course, Jesse exaggerated. Nothing, I assume, can beat the Great Wall of China or the Mt. Everest marathons. But the 42.195 kms. that we trekked last Sunday may be termed, “the country’s toughest 42K.”

The Quezon City International Marathon (QCIM) started at 4:30 a.m. Anticipating harsh weather due to Typhoon Ramil, it did not rain at the QC Circle. Stars glazed. At the Starting Line, hundreds of hearts pounded. Then, after a 10… 9… 8… countdown, the firing gun blasted. Joel Garganera was beside me. Same with Jesse. And Bro. Carlo Bacalla of Don Bosco in Labangon, Cebu. We entered U.P. Diliman in darkness as students slept. Next, we exited and ran along Commonwealth Avenue—all of eight lanes-wide per lane. Cars were barred. It was perfect.

Sadly, this avenue’s surface is a runner’s nightmare. The worst surface to run on, it was cement.

Running beside Bro. Carlo, we chatted. Our pace of 6:20 mins./km was relaxed. At Km. 10, we entered the Batasang Pambansa, made a U-turn, then headed back to Commonwealth Ave.

Along the way, we noticed something unexpected. Because while the QCIM website stated that the course was “relatively flat,” we were treated to a different spectacle: Hills and climbs. It was uphill, downhill. Much like our roads in Banawa or the Mactan Bridge, it was that— multiplied by six, eight or even 12 times.

Then, on the 16th km., we entered a forest. Called the La Mesa Eco Park, the green esplanade was a beauty: trees mushroomed, it was all serene. The problem was, it sloped upward, like climbing Busay.

We ran beside the La Mesa Dam. Again, a beauty. Again, hilly. The worst—and most ironic—part was this: While we were laboring in the toilsome terrain, this Water Dam did not have drinking water. No kidding. For five kms., the organizers did not serve water inside the water dam. And we were damn thirsty!

Finally, when we exited La Mesa and saw the water station, we were ecstatic. But, worse, they ran out of water. And so, a few more kilometers we hiked, our bodies quenching for liquid.

This “no water in the water station” scenario happened possibly five times. Imagine RP’s most big-budget race (P300,000 to the first placer) running out of water? Terrible.

If there was any “blessing,” it was the weather. The sun barely showed it’s hot spell. We were blessed with a shade almost the entire marathon.

But at the 32nd km., I felt a twinge on my calves. Oh, no, I said to myself. Not cramps. Not now. After my first marathon experience—in Hong Kong last year—when I had severe cramps on both calves when both my legs “locked,” I vowed not to repeat the same scenario. And so I stopped. Walked. Jogged. Strolled. My pace dropped to 7:30 mins./km. When a spasm would strike my leg, I’d stop. Walk. That went on for the last 10 kms. of the race. Maybe due to the nearly all-cement terrain and to the uphill-downhill slopes, cramps was about to eat me up again.

Thanks to Bro. Carlo who paced with me the entire way, I plodded on. Using mini-steps and lots of walking breaks, the cramps never turned full-blown. Bro. Carlo and I lifted our arms as we crossed the finish line at four hours, 57 minutes.

Plenty from Cebu joined. Steve “Ferrari” Ferraren was fastest. Despite also cramping in his last 10K, he finished in 4:07. Dodong Sulatre was next at 4:52. Then, Jesse Taborada, 4:56.

First time marathoner Msgr. Siongo Tan did well, clocking 5:11. Annie Neric was next, 5:18. Joel Garganera, who ran comfortably his first 21K before severe cramps hobbled most of his legs, walked the second half and finished 5:29. Mike Enriquez, also running his first, did 5:32. Arnold Palma finished in 5:35. Haide Acuña finished her first 42k in 5:47. Bebot Ignacio (6:17). JayR and Robie Aguilon (6:30). Atan Guardo, running his second 42K after Hong Kong, did 6:34 (same with Ian Baguio) and called it “very, very tough.” Jeson and Jerry Guardo also did it in 6-hours-plus. (In the 21K, Millette Chiongbian and Bert Banzon clocked a speedy 1:44; Frederic Chiongbian, 2:25; Raffy Uytiepo, 2:32.)

In summary, Jesse aptly calls it… “Marathon in Hell!”