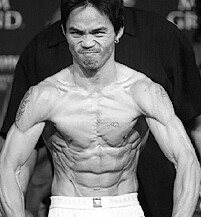 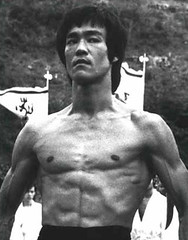 He wore red, high-cut boots by Nike with the words “PACQUIAO” and “MANNY” etched at the back. His black shorts were printed with yellow flames. A gray sleeveless Nike shirt covered his chest while a green pair of gloves wrapped his hands.

Manny Pacquiao had just finished 10 rounds of sparring. Tired? Did he look fatigued? No. How about recharged? Or pumped-up? For one-and-a-half hours, I observed Manny. After sparring, Manny stepped down the ring then proceeded to pummel the double-end bag. He stared at the round leather that hung from the ceiling, encircled it, threw quick jabs, moved his head left, ducked, stepped back, forward.

The double-end bag? To Manny, that bag symbolized the head of Marco Antonio Barrera. His eyes were locked at it, so focused his concentration that he savored every moment barreling the face.

Gerry Penalosa watched. So did his brother, the former champ Dodie Boy, who’s assisting the training. Jimrex Jaca was there. So were Jing-Jing and George Rama, close friends of Manny.

Freddie Roach, of course, supervised the session. With him was Buboy Fernandez, Manny’s long-time trainer. They both clutched stopwatches that hung from their necks. After the double-end bag, Manny bent down to stretch. Buboy wrapped a towel around his fighter then wiped the flowing sweat. Buboy then held Manny’s arms then shook them to stretch the muscles. It was a routine, I’m sure, that they’ve practiced for many Septembers.

The speed ball came next. Manny stepped on a platform then swayed as his hands juggled against the ball. Next, he jump-roped. This was the moment I cherished most: brothers Manny and Bobby Pacquiao, training alongside each other, just three feet apart facing the mirror while jumping rope.

“Bai,” I told Salven, “how I wish I can take that photo.” He nodded. Too bad Freddie Roach has curtailed picture-taking—and rightfully so—as these “shots” might be video footages that can be relayed to the Mexican enemy.

Remember Bruce Lee? Remember how his hands flew off his arms in a flurry of punches? I saw Manny do a Bruce Lee. Alone on the ring, with nothing but air and his mental picture of Barrera fronting him, he shadow-boxed. In seconds, Manny unleashed a barrage of punches—BANG! BANG! BANG karate chops—that had Team Pacman smiling.

Buboy Fernandez then placed a one-foot-tall wooden stand at the center. Manny jumped on it one leg at a time—for countless minutes.

The next part, to me, was the most punishing: 1,000 crunches and sit-ups. What a sight. Manny in the middle of the ring, lifting both legs up, pulling his head to touch the knees. He’d do one set, then another—30 minutes of abdominals to harden his stomach like cement.

A boxer seated beside Salven and I commented, “Daghan mo sabay ni Manny sa training… ma hilantan.” (Many boxers would train alongside Manny and follow his routine… they’d all get sick.)

It’s true. Nobody trains like MP. His routine is intense, serious, all-out, focused. Manny is pushed by Freddie and Buboy—but he pushes himself beyond.

Finally, when the clock read “4:30,” the session ended. The 42-inch Samsung LCD screen hung by Wakee Salud beside the ring was switched on. “Pacquaio vs. Morales Part III” was shown. Manny watched for a few minutes before exiting to shower and eat.

The rest of us? We finished gazing at the three-round KO victory. We sat amazed. Then we nodded our heads. We understood. We knew why he’s the world’s top pound-for-pound boxer.

You see, boxing isn’t won on the ring. It’s not won on October 6. It’s won during the months and weeks of molding and sculpting during training. During the 10 rounds of sparring each session. The kilometers of climbing up Alta Vista. The 1,000 sit-ups. Speed bags. Jump-ropes. Double-end bags. The karate punches that would frighten even Bruce Lee.