Three nights ago, the Pacific Grand Ballroom of the Waterfront Cebu City Hotel glittered. Inside the vast hall tiptoed dancers. Sexy, long-legged, with nothing on their legs but four-inch-tall high heels, their backs stood erect, their smiles ear-to-ear, their poise and stature, exquisite.

They arrived in Cebu to compete. Bulgarians. Vietnamese. Russians. Hong Kongers. Slovenians. Germans. They came to showcase their curvaceous bodies. To wow the judges with their twists and bends and turns and spirals. Wearing sparkling silver or glowering gold or blazing blue, they boogied. Skipped. Whirled. They danced the Rumba, Jive, Chachacha, the Viennese Waltz and, my favorite because it elicited the most noise and frenzy, the Paso Doble.

Last Saturday evening, when participants from 15 nations joined the competition called the 4th Dancesport sa Sugbo and IDSF Dancesport Open, it was an eye-popping experience. When the competition started and the dance pairs were called to the giant wooden dancefloor that slept at the middle of the ballroom, I made sure to stay close. And so I sat on the carpet, just meters away. 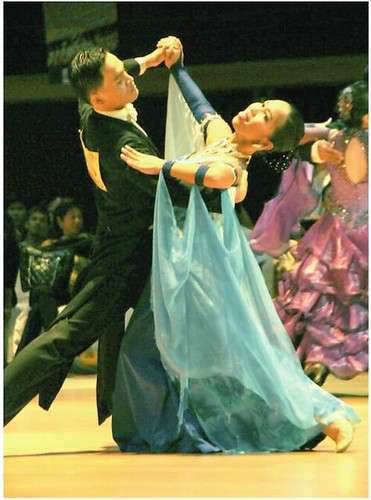 Spectacular! If you’ve ever watched international dancesport, you know what I mean: It was stirring, impressive, stimulating. Not only were the lady participants attractive and captivating, they were also….. Elastic.

Yes, elastic. Bones had been stripped off their flesh. Their bodies were malleable and supple; they could split with their legs, turn backwards to the floor with their necks, fly on the air when thrown by their muscular partners—in simple English, they can do what you and I cannot with our bodies.

It was an absolutely enjoyable two hours watching. Because in dance, it’s not just smooth skins, colorful make-ups and statuesque bodies that are on moving display. It’s not even just about the dance moves. It’s about poise. Confidence. It’s about impressing the judges. It’s about roaring the audience.

Which brings me to Edward Hayco. What a man who steers this ship called the Dancesport Team Cebu City. For over a decade now, Ed and his wife Eleanor, both champion dancers, have selflessly donated their hard-work, time and millions of pesos to promote the sport of dance.

During the Opening Ceremony last Saturday, the welcome remarks were given by Mr. Hayco. What he said impressed me because I had never heard of it before from any sportsman.

“Welcome to the world’s friendliest competition!” said Ed. These six words elicited an explosive applause from the nearly-jampacked crowd in Waterfront. Then Ed continued with these impeccable words…

“The dance floor that you are now standing on… that we hold sacred to… is not only an arena to compete on… but an avenue for friendship!”

Perfect. “When this competition comes to an end tonight,” Ed continued, “it is our wish that you’ll remember more the friends that you’ve made… than the medals you’ve won!”

Inspiring and motivating words, right? “We thank you for giving us the exciting experience of being your host,” he added. “I would like to share with you why your presence is special and meaningful to us… you just don’t realize how much of an inspiration you are to the thousands of dancesport scholars in Cebu City aging from 5 to 25 years old.”

Ed then proceeded to introduce and showcase the young children on-stage—including speaking to an 11-year-old girl named Kathleen who, when interviewed by Ed, said that she regularly teaches 11 to 15 children aged six to 18 years old… for free!

For this is the open secret of Ed and Eleanor and why thousands of our youth—especially those in the inner barangays—now dance. It’s called charity. It’s called selflessness, helpfulness, generosity. The Haycos and their DTCC team—which include Rica Alix and head dance instructor Loloi Rendon, among hundreds of others—are men and women who are magnanimous and self-sacrificing.

We thank Ed and Eleanor for their inspiration. We applaud the DTCC for the untiring sweat they perspire to teach children. We congratulate them for the Guinness World Record. Cebu is proud of you!