The Cobra Energy Drink Ironman 70.3 Philippines triathlon race in Camarines Sur is the country’s first-ever. The race will swim off (2K), bike next (for 90 kms.) and finish with a 21K run this Sunday, Aug. 23. Among the hundreds of triathletes joining are the trio of Gerry Malixi and Annie Neric, both residing in Cebu, and Manila-based cyclist Raul Romulo. They’ll participate in the relay race. I asked Gerry Malixi for the event details and their preparation. Here was his email… 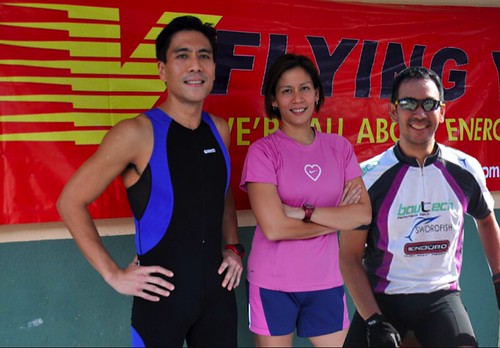 “Who would sponsor a bunch of 40-year-old, over-the-hill slowpokes?” This was the response I gave my good friend Raul Romulo when he said he would ask Flying V to support our stint in the first Ironman 70.3 race in the Philippines. Little did I know I was in for a major surprise.

Raul pointed out that majority of the athletes who do really well in Ironman races are the guys in their late 30’s and early 40’s.  This is because endurance, careful strategy and mental approach all factor into this type of challenge. Raul said that with the proper training and preparation, our team could do very well. A few months later, and to my absolute consternation, Raul gave me a call and said, “Be careful what you wish for, you might just get it. Good news, Flying V has agreed to sponsor our team!”

Flying V has always been known to be a patron of sports. They are a strong supporter of the La Salle basketball team this year. And every year, Flying V hosts the FILOIL basketball league, a pre-season basketball tournament that includes the best teams in the NCAA and UAAP.  Raul Romulo, Annie Neric and I are grateful to Flying V for supporting our Ironman 70.3 Camsur campaign.

“Now’s the hard part,” Raul later says. “With Flying V on our jerseys, we better do well. This is serious, folks!” There are a bunch of fast people in that race including veteran Olympic swimmer Akiko Thompson and some well-known professional cyclists and runners.

As for me, I pondered joining the race back in February. I started out swimming 15 laps (less than 1km) a day in a 50-meter pool at the Manila Polo Club.   Swimming less than 1km was a struggle several months back but with constant training, I can now swim for an hour nonstop quite comfortably.  I finish around 115 laps (2.9km) per swim, four to five times a week mostly at Casino Español and City Sports Club.  In my first TRAP (Triathlon Association of the Philippines) sanctioned race in Sogod, Cebu on July 19, 2009, I placed second in my age group. It was a 1km swim, 30km bike and 7.5km run.  I was sixth out of the water overall (my official TRAP time was 23.08 minutes for 1km).  For that event, I decided last-minute that I’d do the bike event as well. I had no bike training at all and borrowed a heavy and small road bike. I knew it was crazy, but thank God I did pretty well.  After finishing my first sprint triathlon, I can’t help but admire the people that have done the entire Ironman 70.3 race: 2km swim, 90km bike and 21km run.  It takes a special kind of athlete to finish that race.

As for Raul, Annie and me, we just want to be part of this amazing event that will be held in the Philippines for the first time on August 23, 2009. After the race, I hope my former classmate Governor Lray Villafuerte can take us around Camarines Sur. That’s if we can still walk after the race.

As for Team Flying V cyclist Raul Romulo, he is targeting to finish the 90km bike in 3 hours or a maximum of 3 1/2hours.  “My plan I is to pace myself for the first 45km and give it my all in the last 45km”.  To train for Ironman Camsur, I’m doing 30km every other day at least 3x a week. My week ends doing 70 to 95 km. On other days i go to Golds gym for leg weights and circuit training for endurance. For long rides I’ve done are mabitac antipolo and alabang to puerto azul and back.

The main venue (Start/Finish, Swim, Transitions and Accommodations) is at the Camarines Sur Watersports Complex (CWC).  The swim course will use the wakeboard cable park lagoon, a man-made lake with water being constantly filtered and fresh water pumped in daily. The bike course will be on the well-paved road of the National Highway that takes you through rice fields and abaca trees common to the province. The word “scenic” does not do justice to what participants will see and experience in their 90km out and back ride: a view of Mt. Isarog, rolling terrain and a breathtaking turnaround by the ocean (Nato Port) will feel more like a countryside tour ride rather than a race for some. The multi-loop run will be on the tree-lined National Highway towards Naga City. The course is mostly flat with a short steep hill going out. Expect cheering school children and marching bands to greet tired runners along the way.