The United States Practical Shooting Association (USPSA) defines “Practical Shooting” as “attempts to measure the ability to shoot rapidly and accurately with a full power handgun, rifle, and/or shotgun. Those three elements – speed, accuracy, and power – form the three sides of the practical shooting triangle.”

I’ll make a confession: I never liked guns. Footballs, running shoes, a chess board, the go-karts in Kartzone, the swimming pool at the Casino Español, the Babolat tennis racquet—all these sporting equipment and athletic venues I loved….. except guns.

That all changed in the past two weeks. First, inside the Centurion Security Agency, Inc. firing range in Talamban where Jake Mendez, Dr. Ron Eullaran, Rommel Desnacido, Dr. Ronnie Medalle and myself pulled triggers on weapons nicknamed “9mm” and “M4” and “1911.” That was 15 days ago. 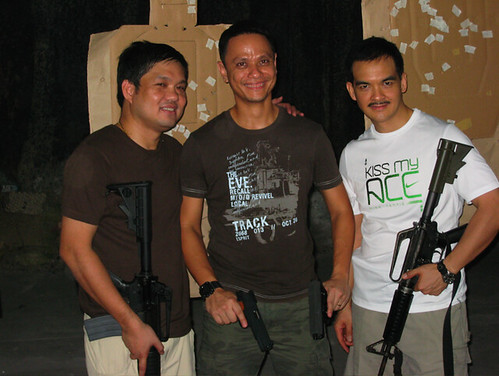 Then, Saturday last week, another Bang! Bang! Bang! session ensued. Was it a blast? Literally! Our group of scribes on these back pages have a group named the Sportswriters Association of Cebu. In short, SAC. And, starting this year, to ensure that we SACers don’t “suck” at the sports we write about, we made a goal: to try as many sports as we can. Not by looking. But by hand.

And so we fired guns. Thanks to Karlon Rama who, to gun-shooting is the same as Jingo Quijano is to boxing, Boy Pestaño is to chess and Noel Villaflor is to football—we met last August 13.

Our SAC group converged at the famous Kamagong Gun Club located inside the Camp Lapu-Lapu grounds. Who attended? From The Freeman, Nimrod Quiñones, Bobby Motus, Raffy Osumo and Caecent Magsumbol. From Cebu Daily News, there were Jonas Panerio, Kelvin Cañizares and Calvin Cordova. From our Sun.Star Cebu, it was Karlon, myself, photographer Ruel Rosello and boxing writer Edri Aznar. 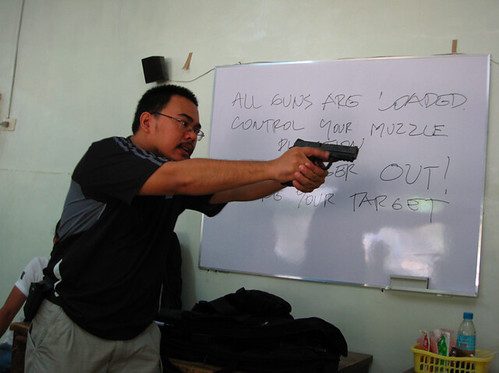 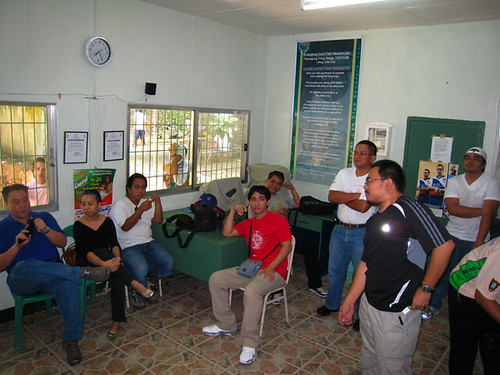 Karlon gathered us inside the air-conditioned clubhouse for a 20-minute briefing. Next, we stepped outside where the highly-respected USPSA Grand Master Rey Abad briefed us about gun-safety and the step-by-step process of firing a handgun. Then, it was the actual shoot. Five sportswriters lined up facing a cardboard target only three meters away. All together and listening to the careful instruction of Rey Abad, they loaded bullets inside the magazines, cocked the 9mm pistols, aimed at the targets and… Bang! Boom! Boom! Bang! 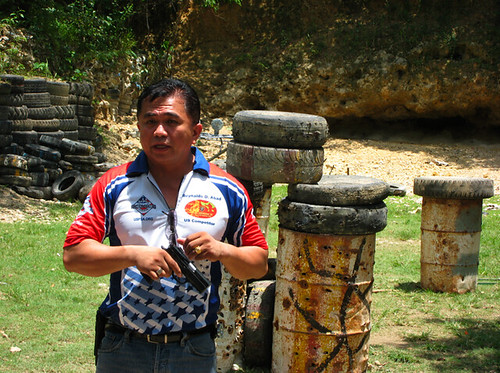 Jonas Panerio of CDN, our group’s basketball sharp-shooter who effortless nails three-pointers like it were lay-ups, is tall, well-built and sturdy. But firing his first-ever gun shots, he looked petrified. Jonas looked as stiff as a basketball goal post. Caecent Noot-Magsumbol was the only female scribe that morning. Slender and svelte, we thought Caecent couldn’t muster the strength to pull the trigger. She did.

After, we tried practical shooting. This is one of Cebu’s popular sports (remember the 1999 World Shoot held in Mactan?) where a shooter is challenged to test his accuracy and speed in an obstacle-laden shooting course. We fired two shots each at five cardboard targets then aimed at metal plates about 35 feet away.

Highlights of the activity? Plenty. Cebu City Councilor Sylvan Jakosalem joined us for three hours. He’s a marksman. Not surprising because the sister company of Y101, which Jack heads, is the gun and ammo company, Armscor. Councilor Jakosalem brought along his .357 magnum which Nimrod and a few others tried. Joel Concepcion of Armscor was a sharp-shooter; same with the brothers Ariel and Martin Bellarmino, accompanied by their dad, Lowell. 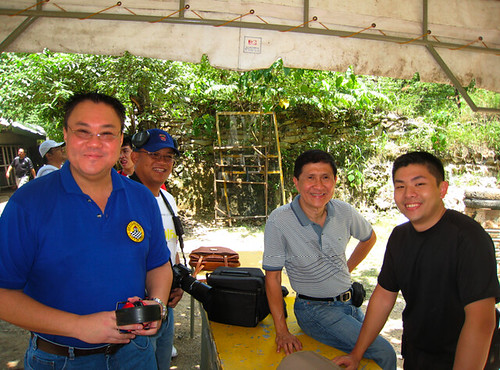 The climax of our session was the demonstration by Dino Cinco, a superstar at practical-shooting (and a recipient, not long ago, of the SAC-SMC All-Cebu Sports Awards). Accompanied by his ever-supportive father, Simon, the young Dino Cinco wowed the sportswriters with his briskness and accuracy. He finished hitting 15 targets in 10 seconds! Gliding through the course, he was firing while running—just like in the movies.