Gerry Malixi, who competed in the 1.9-km. swim category of the country’s first-ever Ironman 70.3 triathlon race, was in Camarines Sur. I immediately called.

“I was chatting with Miguel five minutes before the swim started,” said Gerry. “We were joking around. We kidded each other saying to be careful of each other’s elbows in the swim. We then joked on who would treat the other for lunch after. Senator Pia Cayetano was with us.” 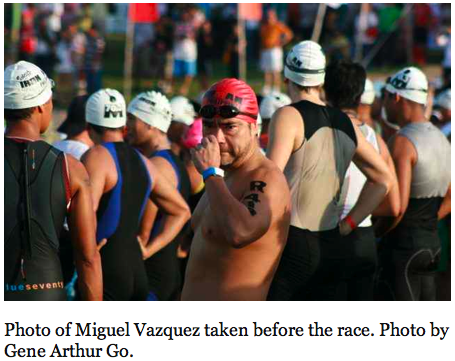 Gerry and Miguel were friends from the Manila Polo Club, where both practiced swimming laps prior to the Cam Sur race.

“After all the swimmers had finished, his teammates alerted the Ironman officials on Miguel. He had not emerged from the lake yet. It was then that someone accidentally stepped on his body in shallow waters at the lake,” said Gerry. “When I heard about the incident, I rushed to the ambulance. I wanted to tell Miguel to hang on there. But, no more. He was all blue.”

Minutes after, Gerry and the thousands who had trooped to the Camsur Watersports Complex received the most devastating of updates: Miguel was dead.

This is tragic. It’s shocking. It’s dreadful and horrifying. Did he drown? Was he kicked in the face where he scrambled for air and swallowed water? What happened?

Medical investigation is still underway but, thus far, the initial findings point to an occurrence that can happen to you, to me or to anyone else at anytime—while swimming, while brushing our teeth, while having lunch, while sipping coffee, while sleeping. It’s called heart attack.

Based on the popular website Spot.ph in its post entitled, “Executive, 52, dies in Ironman 70.3 triathlon in Cam Sur:”

“According to Lara Parpan, Ironman 70.3 race participant and editor-in-chief of Women’s Health magazine, ‘Miguel apparently finished swimming through the first big lake (known as Lago del Ray) then made it to shore to run the 100 meters to the smaller wakeboard lake. It was there that he was found. Those of us at the clubhouse didn’t see him or suspect anything was wrong because there is a little island in the middle of the small lake and he disappeared on the opposite side of the island.’ She adds, ‘His teammate Johann Espiritu had been waiting for over an hour to come out of the lake. And that was when they sounded out the lifeguards, but it was too late.’”

Added the Spot.ph article, “Says architect Gene Arthur Go who was there to watch the race, ‘Miguel and I were on the same plane heading in to Cam Sur and we were chatting leisurely late yesterday afternoon as he was waiting for his other teammates to join him. He said he just got in from Hong Kong to join his teammates in Team Alamat. He didn’t want his team to be disqualified as there was a registration deadline. He had to leave his family behind in Hong Kong after they had dinner together after his daughter’s school play.’”

Alaska CEO Fred Uytengsu, Jr., whose Sunrise Events Inc. was the event organizer, immediately discontinued his own participation as one of the competitors in the Ironman upon hearing of the tragedy. “Miguel was a personal friend of mine,” said Uytengsu. “Our deepest condolences to the family, who ?have been informed of the tragedy and we will extend all necessary assistance.”

Uytengsu described the 52-year-old Vasquez, the president of Permanent Plans Inc., as a “strong swimmer.”

“Just recently,” said Uytengsu, “Miguel joined us in an open-water swim in Batangas.” Uytengsu added that athletes who compete in triathlons “know that deaths do occur and ?almost all of them do happen in the swim leg. This is always a risk but whenever this happens, it is deeply saddening.”

In the days to come, we’ll know the exact reason for this tragedy. For now, let us join the sporting community in praying for the soul of Miguel Vasquez.