Twelve months ago, the most lavish and best-prepared Olympics happened for the first time in China. In the next week or so, I’ll be re-posting my articles from those 08-08-08 Games. 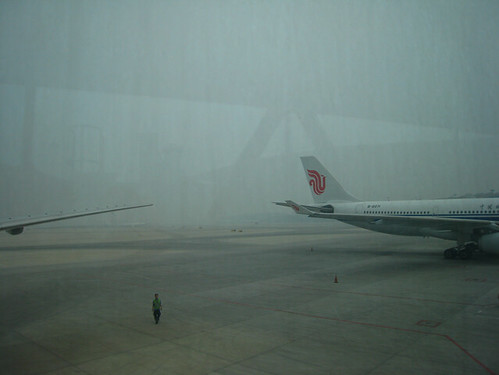 BEIJING (Originally written on Aug. 8, 2008)—Yesterday, after only four hours of sleep each of the past two nights (that’s what happens when you tour a metropolis as large as Shanghai in only 36 hours), as soon as our Air China flight lifted off the Shanghai airport runway, my eyes went shut. But it didn’t take long for the stewardess to nudge me off my sleep; she brought along a present for all passengers: a Boeing 737-700 replica of the same Air China plane, with an added signage at the plane’s tail-end that’s symbolizes this country: “BEIJING 2008.”

At 9:50 a.m., less than two hours after departing Shanghai, we landed at the Beijing Capital International Airport.

You won’t believe what we saw in Beijing as soon as we landed: Nothing. Yes. Nothing. We couldn’t see anything. I’ve landed in numerous airports and, must say, that I’ve never landed in one where visibility is so blurry and foggy. All the talk in CNN and BBC about Beijing’s smog– why, I thought all of that was exaggeration. Until my wife Jasmin and I saw the fuzzy sight for ourselves.

The airport looked like it was filled with smoke. You could barely see the other planes. Unlike our touchdown to the Mactan, Cebu airport where you see green mountains, our two bridges, and dottings of white sand along Punta Engaño, here there was one color: grey.

But the airport? Here’s my three-letter description: wow. It’s brand-new (or, at least, the section where we landed) and ultra-modern. And, oh, lest I forget: it happens to be the world’s largest airport.

As soon as we walked the hallways, the color red dominated the walls with posters and banners and streamers. This is Beijing’s welcome party to the world and it’s made sure to place welcome signs everywhere.

Guess what? As soon as we reached the baggage claim area, within a minute, a flock of Olympiads descended. They were Canadians, Australians, Croatians, Brazilians—they came in full attire, donning their national colors, men and women loaded with muscles, towering in height.

As I drew near, it was a moment that you can term “ecstatic.” Because even if the sight of Michael Phelps or Novak Djokovic or Tyson Gay wasn’t what we saw—at least, not yet—but standing side-by-side the world’s greatest athletes is exhilarating.

Wasting no time, I asked two Olympiads from Canada for a picture and they willingly obliged. Part of the Canadian sailing team (whose competition, I believe is in another city outside Beijing), they had just arrived yesterday to take part in a spectacle that, I hope, you watched last night: the Opening Ceremony.

From my front-view media seat inside the Bird’s Nest, I’ll be reporting to you tomorrow about my experience. (Just kidding! I didn’t have Opening Ceremony tickets and watched at a public arena .)

So, lucky you—watching from the comforts of your house!

More stories tomorrow… But for now, as they greet you here when you arrive… Beijing Huanying Ni!