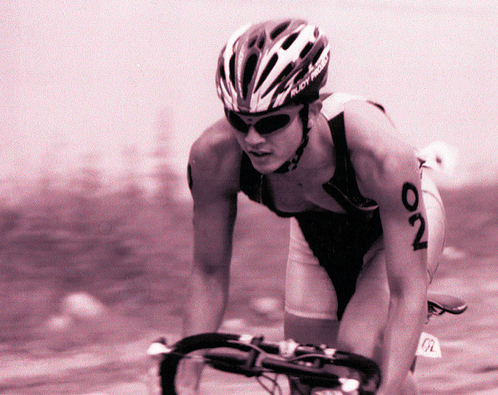 The 96th Tour de France has ended—but the word war just started. No sooner had Alberto Contador arrived in Spain when he unleashed a torrent of insults, saying, “My relationship with Armstrong is nil… I’ve never had a great admiration for him and I never will!”

Ouch. That’s distasteful. And, to a seven-time TDF winner, upsetting and embarrassing. But never one to surrender a fight, Lance responded: “Hey pistolero, there is no ‘I’ in ‘team.’ What did I say in March? Lots to learn. Restated.”

Ouch. To think that, just days ago, the two were teammates sleeping in the same French hotels, pedaling the same Trek bikes, wearing the same Astana jerseys. Not anymore. A boxing fight on two wheels has erupted. And this hostility has extended to their congregation of fans worldwide.

Take Kerry Flickner. Just the other day, I received this email from the American: “Your comment that AC is the next Lance Armstrong is currently the most ignorant comment I’ve heard to date. Your man Alberto will never be the kind of man Lance is or has been. Yes, Alberto won a second tour and yes he’s the strongest, but to compare him to Lance as the next Lance is extremely presumptuous!

“Besides my 15 years of competitive cycling and an avid follower of professional cycling including pre-Greg Lemond tours, I can assure you that although AC is strong, he lacks the pure talent, grit and maturity that Lance has exuded since he was given a 50/50 chance of living. AC is nothing but a strong kid with an ego that will cause him to be humbled by, if not Lance, another rider in 2010.” 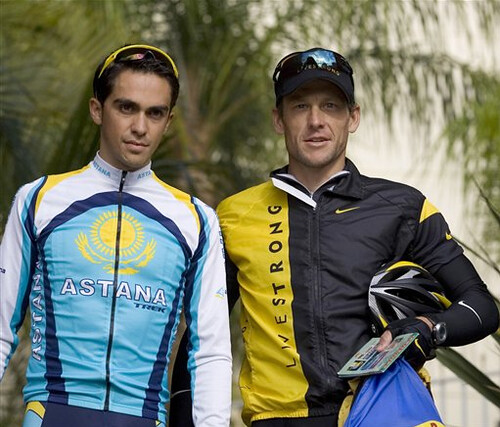 Forceful words. I also sought another opinion, this time from Chris Aldeguer. Apart from being a former national-caliber triathlete and cyclist, Chris is a staunch Lance devotee (and, as many will say, a Lance look-alike). Here’s Chris…

“The issues between Lance and Alberto were obvious during the Tour. It was clear they were uncomfortable as teammates. Contador was viewed as the favorite while Lance was a Legendary Cyclist getting the share of the spotlight. Both being competitive, this was a recipe for controversy.

“Was it wrong for AC to make those comments on Lance? Well, it did not seem classy especially coming from a Champion. However, what we don’t know is what goes on behind the cameras. Contador was bothered that Lance was even considered to possibly win the Tour. Contador believed that he was the better cyclist and to him it was obvious that the team should ride for him alone. Lance is Lance and he was there to win.

“Lance did ride obediently as a teammate when it was obvious that Contador was stronger. Lance deserves this credit. However, Lance also didn’t show support to AC. He publicly questioned Contador’s tactics. He didn’t attend AC’s Tour win Celebration and didn’t congratulate AC in the podium. This, however, shouldn’t justify AC’s tirade towards Lance.

“Truth is, it would have been more surprising to me if no controversy was going to come out. Putting both these competitive riders in the same team is like boiling water. As much as we want to say they shouldn’t have been together in the first place, they did get things done. AC won the Tour and Lance made the podium which was impressive.

“This is similar to the Kobe-Shaq situation. They obviously didn’t like each other, but they won 3 titles. However, despite their team’s success, the dislike for each other meant they were going to part ways. This leads us to next year’s Tour. Now with separate teams, we just could not wait to see the AC vs LA match-up…

“I also think Contador is the Floyd Mayweather, Jr. of cycling. Love or Hate, he sells and he wins. He is that good.

“Lance? He’s unbelievable. With his age and absence in top level cycling for several years, I expected him to not even make top 5, let alone 3rd place.

“Lance’s motivation now can be in the highest level. He is already starting to build his new team. It would be very difficult for a 37-year-old cyclist to win the Tour, but if there is someone who could, it will be Lance.” 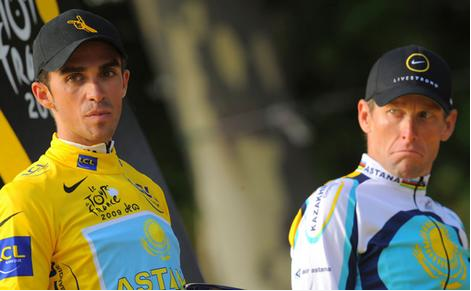