The Tour de France is our planet’s most punishing and excruciating sporting event. It spans 23 days—that’s 21 marathons of pedaling and only two days of rest in-between—covering a total distance of 3,445 kms. From the start in Monaco, it traverses through seven mountain stages, six countries that include Spain, Andorra, Italy, Monaco, Switzerland and (of course!) France, and will finish today, the 26th of July, along the Champs-Elysees in Paris.

I’ve been to the Champs-Elysees. The year was 2001 when my wife Jasmin’s father, Jack Villarosa Mendez, brought our whole family on a European sojourn. That Parisian street, one of the world’s most prominent, I recall as a beauty. And, today, as the 170 or so cyclists joining the TDF will pass through that sight, one man will find the Champs-Elysees with the utmost beauty: Alberto Contador. 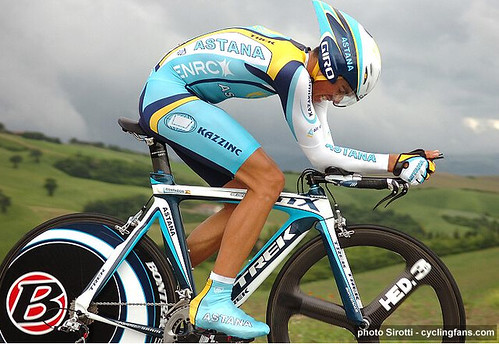 Doubters? Are there still any out there? Anyone? Because when “Le Tour,” as the Tour de France is often nicknamed, started last July 4, many critics, myself included, thought Contador would capitulate. Sure. He had won the TdF back in 2007—but where was Lance Armstrong? Sure, he captured the Giro d’Italia and Vuelta a España in 2008 to become only the fifth man ever to win all three Grand Tours of cycling—but where, I repeat, was Mr. Strong Arm?

Well, this July of 2009, a cancer survivor embodied by the yellow rubber bracelet called Livestrong resurfaced. Lance Armstrong joined Le Tour and, in a duel between a seven-time winner and the most skillful young man on a bicycle…. the teener extinguished the granddaddy. Alberto annihilated Lance. No, cycling is not a combat sport where protagonists carry swords; but, if it were, then Contador bloodied Armstrong.

Rivalry? What rivalry? It started in Stage 15 atop one the French Alps. At the climb of Verbier, the Spaniard zoomed past the American. Then, two days ago at the Individual Time Trial, while the Texan placed a disappointing (to him) 16th place, The Man In Yellow won the event.

Weighing only 138 lbs. and standing 5’9 ½”, Alberto is “Le Giant” of Le Tour. Writes Reed Albergotti in “Contador’s Other Quest: Best Climber Ever” in the Wall Street Journal online edition, “Ross Tucker, a South African physiologist who writes about the Tour on his ‘Science of Sport’ blog, calculates that Mr. Contador shot up the climb to Verbier last Sunday at a rate of 6,116 feet per hour. That’s the fastest ever in the Tour de France and quite a bit quicker than Lance Armstrong’s blazing ascent up Alpe d’Huez in 2004.”

Isn’t that amazing? A one-man show? Yes, it is. But want to hear an even more amazing scenario? It’s called… “next year.” Yes, the season 2010 will probably go down as one of the most breathtaking Tours de France of all time. Here’s why. First, Contador is at the very top—at the Mt. Everest—of this sport that climbs mountains. He’s unbeatable and invincible. Nobody can catch him—not on top of mountains, not on individual time trial pursuits. So, he’s sure to win his third TdF in 2010, right? 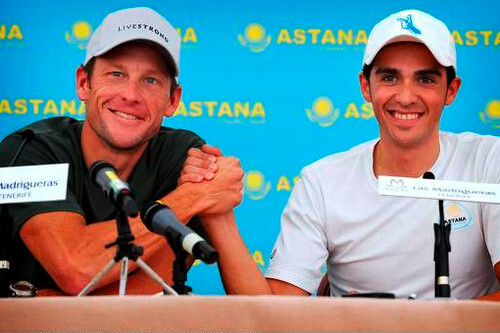 Not so fast. Come July next year, the losing cyclist in ‘009—one who feeds off anger and challenges—will be angry and challenged to beat Mr. Contador. Yes. The seven-time TdF winner Lance A., after training for only 10 months this try, will have a new RadioShack team plus nearly two years of training under his cycling belt. He’ll be hungrier, stronger, fitter. And, yes, older.

At next year’s Le Tour, Lance will be nearly 39 years old. Wow. In cycling age, that’s ancient. Consider that Contador is younger by 11 years and two-and-a-half months. That’s a huge age-gap. But, then again, Lance is Lance. He’s the toughest, mentally-strongest human being on earth. Possibly, ever. So this challenge next season—and the sting of his defeat this year—can only get him madder.

But, for now, one man is the French toast. In 2010, let’s see if an American can French fry the Spaniard.