On the cover of the Sports Illustrated February 2 issue is one man with eyes closed. A dark blue headband wraps his forehead. His left forearm is blanketed by a giant tattoo with one word at the bottom: BEAST. The cover title? It spells it all: The Power of LeBron.

Of the thousands of articles churned about No. 23, this SI piece masterfully written by Chris Ballard is different. Why? Because it partitions LBJ literally. As if to dissect a grasshopper in Biology class to decipher why it hops, Ballard chops LeBron’s body into pieces to reveal his power. “He outweighs centers and outruns guards,” the author says. “He is getting bigger, stronger and smarter—he even sees better. To appreciate the ways in which Cavaliers star LeBron James is evolving, first you have to break him down.” 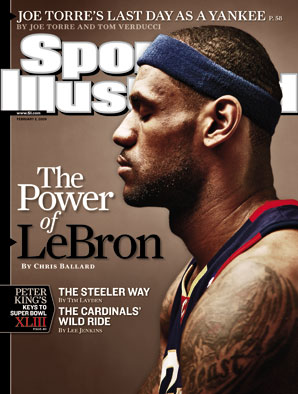 LeBronatomy 101, he calls it. Here are snippets…

Weight. LeBron entered the league in 2003 weighing 240 pounds. Today? When Ballard met LeBron for the interview in San Francisco two weeks ago, he brought along a weighing scale but LeBron laughed and said, “I can’t let everybody know everything about LeBron.” But his true weight: A Cavaliers source puts it at 265 to 270—which makes him even heavier than Cleveland’s 7-foot-3, 260-pound Zydrunas Ilgauskas.

Chest. Would you believe that LeBron started seriously lifting weights only last June? Says the piece: “He just messed around in the weight room and got by on raw strength his first few years,” says Cavs trainer Mike Mancias. Now James lifts every game day for 20 to 30 minutes, following a set routine.

Arms. LeBron spent five days a week, an hour and a half per session, working on his jumper last summer. According to the statistics of last year, he only hit 37.1% of his two-point jumpers from the top of the key and the wings. And so James worked to develop a “calmer” shot. Thus far this season, he’s averaged 43.8%–a big jump.

Feet. LeBron’s are a size 16. Those are giant-large. “Most players can go full speed from baseline to baseline in somewhere between 11 and 14 strides,” says trainer Idan Ravin. “LeBron covers that in nine or 10.” In particular, it helps LBJ’s defense. “Draw a circle of, say, six feet around most players and this is how much space they can patrol—call it their defensive radius,” says SI. “For James, that circle can become almost twice as big.”

Legs. We know LBJ can jump. But, how high? Figures would say his vertical leap is 44 inches. Basketball, we know, is about jumping. You jump when you dunk, rebound, block and, in his case, doing jump ball. A few weeks ago, LBJ faced the Memphis Grizzlies center, 7-foot-1 Marc Gasol. LeBron won the tip. Says Ballard, “A week later he played center for nearly 12 minutes against the Hornets and held his own, which should come as no surprise considering what he did during the Olympics.” Eyes. LeBron had terrible eyesight as a child. “I was in the classroom, and I couldn’t see the chalkboard, so I had to move to the front,” he said. “I couldn’t see a sign three blocks down. I couldn’t see a lot of stuff.” And so, during high school and his first five years in the NBA, he—unbelievably—dominated the sport without a perfect 20/20 vision. Then, a little over 12 months ago, LBJ got Lasik surgery. Yes, the same eye treatment that our top eye centers in Cebu offer. What happened? “It’s kind of cool, because I can see stuff in the distance,” he said. “I’m like, So that’s what that is!”

Hands. How large? They’re 9 1/4 inches from the bottom of his palm to the top of his middle finger. Those humongous fingers have made him palm a basketball since the 10th grade. “This allows him not only to wave it around if he so pleases on drives but also to grab a disproportionate number of one-handed rebounds. It also enables him to throw passes with astonishing velocity,” says Ballard.

Brain. Finally, it’s the mental strength that sets the 24-year-old apart. As Chris Ballad says, his mind is like that of a topnotch CEO. As for me, I spell those three letters differently: MVP. 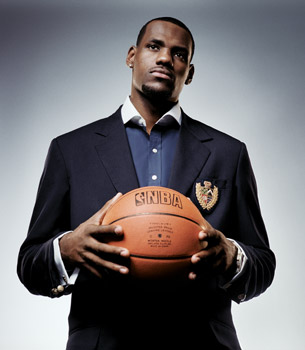