Thanks to Atty. Jovi Neri, one of Cebu’s top golfers and the chieftain of the Cebu Country Club JunGolf program, I received stunning news. From the website that Jovi created, http://cccjungolf.multiply.com, here are the juicy details of a phenomenal feat… 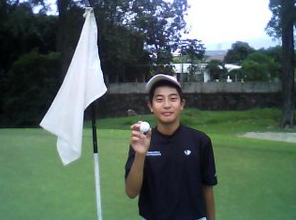 Barely a week after he was officially selected to play for the Cebu Country Club Men’s Regular Team in the PAL Interclub, Lloyd Jefferson Go wasted little time making the captain comfortable with his choice. On the Sunday of January 11, 2009, Lj hit one of the most elusive shots in golf – a hole-in-one – on the par-3 15th that was playing close to 160 yards. It was a perfect shot that never left the flag, and slowly rolled into the cup after landing softly on the green. Lj’s magical club was a Taylor Made R7 XR 8-iron with a True Temper GS 75 shaft, using a Titleist Pro V1 392 #7 ball. His only connection to his club were his grip and glove, which consisted of a red Golf Pride DD2 grip and a Kasco Power Tornado black glove both from Red Golf. The witnesses to this rare feat were former jungolfers: Toby Florendo, Macky Michael, San Remegio vice-mayor Nino Bascon, and CCC Jungolf Chairman Jovi Neri. Lj’s dad Charlie was also there.

As Lj’s ball disappeared into the cup, Jovi looked at Lj and asked if it was an ace. Lj’s caddie Rodin was the one who said it was an ace but Lj did not want to believe. But Jovi knew what he saw so he congratulated Lj and asked everyone in the flight to do the same. It was really only upon getting to the green, when Lj walked to the hole to pick up his ball that he was really sure then he got high fives from his flightmates.

At 13 years old and 343 days, Lj’s flightmate Macky theorized that Lj may be the youngest player ever to ace a par 3 in Cebu Country Club from the members’ tees. This may probably be true although there are no records to prove or disprove it. Other jungolfers in the past such as Bigjan or even Lj’s sister Lk have scored aces at younger ages but not from the members’ tees.

Ever since CCC Team Captain Montito Garcia requested for jungolfers to submit their statistics starting July last year in order to find a jungolfer who could be groomed to play the PAL Interclub, Lj has responded to the challenge. Not only has he had the lowest scoring average, he is the only one left who has religiously submitted his scores. His marked improved has showed.

From July to September, Lj’s scoring average was 79.33. However, he picked it up starting October, as he has averaged 76.42 over the last three months of the year which is well inside the top ten players for Cebu Country Club. His putting has also improved vastly, from 30.44 over the first three months to 27.83 over October to December. Through all these 6 months, he has hit a whopping 87.8% of his fairways. Another impressive stat is that he only played 2 games from the blue tees over the first three months, but 5 blue tee games over the last 3 months including a game where he beat 7-time club champion Montito Garcia gross.

While his scoring has always been consistent, it is his tournament performance that merits recognition. He shot rounds of 73-71 during the Corn Tee in Club Filipino, and then rounds of 75-75-80 in the Alta Vista Jungolf Challenge. He had a couple of disaster holes in the final day of Alta Vista, but under the Stableford system used in the PAL Interclub, it would still have been 33-33-32 points.

In December, he shot a first round 72 in the Nike Southern Junior Classic which was his lowest tournament round ever. Ever since 2003 when records were kept, no jungolfer has shot even par or better from the white tees at age 13 in a tournament game. Lj has also consistently scored in the 70s in Men’s Monthly Medals. Earlier in the summer, he almost scored a major upset against Jungolf Chairman Jovi Neri in the first round of the Club Championship, coming back from three down with three to play to force sudden death.

Lj’s ace puts him in the company of CCC junior golfers who have scored aces under current chairman Jovi Neri’s administration since 2003: Bigjan Ybanez, Kento Nakada, Lk Go, Hannah Wong, Kathleen Uy, and Abby Olea. His clubbing on the 15th, which was an 8-iron, is probably one of the shortest clubs ever used to ace the hole from those tees.

The next tournament for Lj would be the Junior Monthly Medal on January 25. He will receive his trophy for the Quarterly Lowest Gross which was the aggregate score from the October to December Monthly Medals last year. If the Hole-In-One Plaque is done by then, it will also be given to him then.

His selection as the youngest player to ever play for the CCC PAL Team is justified and well-deserved. Congratulations Lj, and good luck in the PAL Interclub!