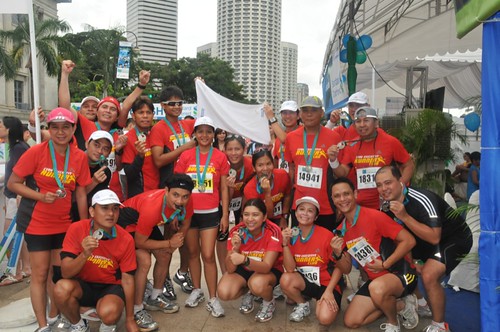 SINGAPORE—As much as we wanted to watch Manny Pacquiao, his fight was not shown here. Too bad. But what a victory for the Filipino! Updates on our Singapore Marathon… Millette Chiongbian ran the fastest, but what a story: Staring at her Garmin GPS watch in the early part of the race, Millette’s pace read “6:00 mins./km.” That’s too slow, she told herself, and so she sprinted. The next thing she realized, her speed was 3:45 mins./km.—unbelievably fast.

It turned out that because of the trees that loomed high along Singapore’s roads, the GPS watch calculated wrongly. Millette blazed too fast and cramped—from her toes to her ankles to her legs. She stopped. Asking for liniment from those nearby, she winced in pain. And this was still KM. 14! She was nearly about to call an ambulance but decided to walk, run… Mile after mile, Millette labored on, absorbing all the pain through sheer determination. In the end, what a remarkable time: 3 hours, 48 minutes.

Harthy Satina was also on pace to finish under 4 hours (or “sub-4,” as runners term it) but succumbed to cramps at KM. 42—just meters from the finish. Still, Harthy finished in 4:05. Steve Ferraren timed 3 hours, 19 minutes with only five kms. left before he cramped in both legs and his left shoulder. The remaining 5K? Steve walked; still finishing in a speedy 4:19. Dr. Vic Verallo—one of the most seasoned of runners from the Cebu Executive Runners Club—grew stronger and faster as the race lengthened. With the helpful hands of his wife, Dr. Susan, who massaged Vic’s legs the night before, Dr. Verallo posted a Personal Best (PB) time of 4:28. Dodong Sulatre also did exceptionally well—he finished in 4:42. Meyrick “Jacs” Jacalan, running his second 42K after Hong Kong, also succumbed to cramps at KM. 27. He waited in line for a muscle pain rubbing in one of the tents scattered along the course—never mind if this slowed him down by 15 minutes. In the end, his time was still highly-respectable: 4:58. Jesse Taborada came in next. A veteran of three marathons, Jesse—wearing our signature red Adidas T-shirt but with an accompanying red bandana that made us term him “Kamikaze Jesse”—finished at the five-hour mark. Jane-Jane Ong, in her first marathon, could easily have finished “sub-5” if not for the knee pain she suffered. Still, she completed in 5:09. Annie Neric twisted an ankle in training last week and the injury resurfaced at the 12th km. Never mind the pain or the worsening injury—Annie trudged on to cross the finish. Dr. Albert Santos finished. Nap de la Torre was fast; Kenneth Casquejo, Roy and Dr. Rosan Trani, Roel Militar, Dr. Alex Junia, Dr. Nicole Chua, Rudy Tindugan, Jean Claire Pineda all finished. Frederic Chiongbian literally cried at the finish line—not because of injury—but to celebrate an amazing feat of running 42K that few are able to accomplish. Dr. Tito Macarasig emerged as the most celebrated of the Cebuano finishers. With almost zero mileage the past months due to injury, Tito crossed the line 6 hours, 50 minutes to the most thunderous of applauses. In all, all 29 runners from Cebu finished. And though cramps and aches hampered many, what’s important is the willpower to cross that finish line. 21K. Perl Jacalan, midway through her Half-Marathon, took off her shoes to place Band-Aid on her blisters. Like many of the 50,000 runners who suffered pain en route to the finish, Perl was not exempted. She clocked 2:50. My wife Jasmin? She enjoyed her first 21K. She spoke to volunteers, did walking breaks, gazed at the Singapore sights—and finished in three hours. TORTOISE? On my part, I ran a steady pace—never getting injured, relishing and enjoying the entire way—finishing in 5:20. Will write in more detail soon—but the one difference I did this time: I prayed. With the rosary bracelet gifted by Vic Verallo, I prayed while on the run. And, when I finally crossed the finish to celebrate a moment I’ll never forget, the first act I did was to point both hands to the sky and thank Him.