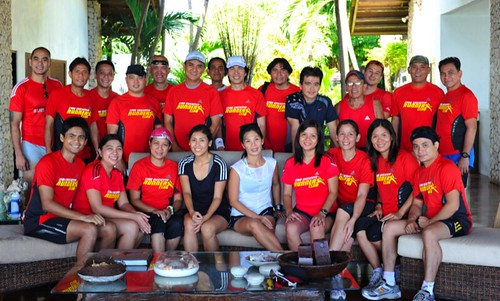 Fourteen days from today, on the same Sunday morning when Manny Pacquiao steps on the square ring to battle Oscar de la Hoya in the biggest sporting event ever by a Filipino, 28 Cebuanos will step on the asphalted roads of The Lion City to fight another battle: the Standard Chartered Singapore Marathon.

Valid question, bro. When 96 percent of the populace (in my farfetched estimate) have not even ran beyond 5,000 meters, why march that far? My answer….. Because it’s there. That’s the same reply that British climber George Mallory gave back in 1924 when he was asked why he wanted to climb Mt. Everest. Because it’s there. (Unfortunately for Mallory, he disappeared on the way to the summit.)

Like a go-kart champion would dream of riding Formula One, like a 100-meter dash sprinter would fantasize of joining the Olympics, like a Boom-Boom B. would aspire for the world boxing title, like a Greg Slaughter would daydream of the PBA—ordinary runners have one ultimate goal: to complete 42 kms.

What’s rare about the marathon is that you run together with the world’s best. Though it’s impossible to sprint as fast as the world record holder, Haile Gebrselassie (2:03:59), it is possible to run in the same race with him. Nowhere, I believe, of any sport, is this possible. Can one dribble alongside LeBron in the NBA, swing volleys with Federer at Wimbledon, drive behind Lewis Hamilton, putt alongside Tiger or kick the football to Ronaldo?

Why Singapore? Plenty of reasons: (1.) It hosts one of Asia’s largest marathons with 50,000 joining. (2.) Singapore’s not too far. Relax on the plane’s seat for 3 ½ hours and, the next thing you realize, you’ve landed on one of earth’s cleanest countries. (3.) The course is flat and there’s no cut-off time limit. Plus, the weather is like Cebu’s—meaning it’s easy to simulate your training runs. (4.) And, best of all, a large group from Cebu is joining….

Our group of 28 is double the 14 Cebuanos who flew to Hong Kong last February. And, from Manila, I learned that nearly 100 runners are joining.

The Cebu Executive Runners Club (CERC) is our group’s name and we’ve trained for the past four months. Each runner has his or her own training regimen during weekdays but, each Sunday, we do our “long runs” together. We start off at the Capitol (with it’s “0” km. reading) then hike to distances as far as—like doctors Vic Verallo and Albert Santos did last week—36 kms. We’ve marched to the tip of Cordova, jaunted to Danao, slogged through Osmeña Blvd., the reclamation area, V. Rama St., Subangdaku in Mandaue—just about every single roadway of Metro Cebu.

It’s tiresome, your legs feel haggard, your heart is lethargic—but it’s fun. You talk with a fellow runner while your legs jump, you see sights about town that you’d only see by foot and, best of all, it’s a time for prayer.

You see, upon the advice of Jess Taborada—and also practiced by my wife, Jasmin—there’s no better time to spend in prayer than while running for three hours.

The best prayer on the run? The Rosary.

My favorite mystery? After near-fainting at KM. 23? The one prayer that relates to your suffering? The Sorrowful Mystery.