If you subscribe to SkyCable and click on the Balls channel 33, or, if you’re wired to a Dream Satellite TV and point to Solar Sports, each night for the next two weeks you’ll be treated to warfare. Fought on dirty and muddy brown clay, your eyes will feast on two nemesis, each carrying a long-barrel shotgun and firing back bullets that zigzag and sting. Then, after four hours, one warrior hangs his head while the other raises his arms to the Moon in victory. 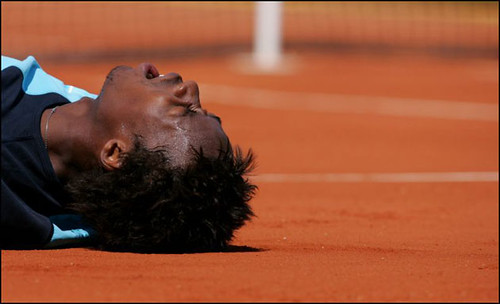 And, tennis soldiers have been engrossed in the battle since 1891. Yes, well before anyone of us was born—and much earlier than the 1914 start of World War I—the French War started. At first, it was a battle only among Frenchmen. But, as the years dragged on and it’s popularity mushroomed, in 1925, it opened it’s doors to accept enemies from around the globe.

Because, other than seeing men wounded and bloodied, at the French Open, there’s strife, struggle, schism; it’s a battle, a wrestling fight, a duel.

“Roland Garros” is the name of the venue and, if you think he was the 1891 champion, no he wasn’t. To add merit to calling it “French War,” Roland Garros was, in fact, a fighter aircraft pilot and French aviator who, during World War I, became the first man to fly a plane over the Meditterranean Sea. 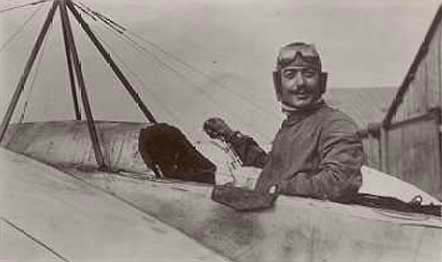 So, there. Perfect. The French Open, to prove further, is war because, instead of rifles and bullets, the soldiers carry racquets and balls.

It’s war because it’s the most laborious tennis event on planet earth to win. Around the seven continents, tens of thousands of tournaments abound from February to January. But, ask scholars who’ve studied tennis for the most backbreaking and arduous of all events and you’ll hear the judges proclaim a unanimous decision: Roland Garros.

Why? Simple: Among the four Grand Slam events (the Australian, the French, Wimbledon and the U.S. Open), the French Open is the only one played on clay. Wimbledon, which starts on June 23, is on ultra-fast, slippery grass; the ones in Melbourne and New York are on fast hard-court. 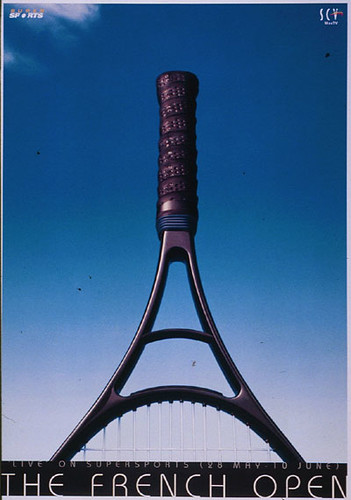 While matches in Wimbledon, for example, will finish in less than two hours, at Roland Garros, four to five hour matches are common. Imagine playing a four-hour match today, then, two days later, playing a three-hour game, then, 48 hours after, a five-hour match? Imagine doing this for seven straight matches! By yourself!

That’s why Boris Becker never captured the French flag. Same with Stefan Edberg, John McEnroe, Jimmy Connors and Pete Sampras. And, up until today—though I hope this changes next Sunday—this list includes Roger Federer. They all play fast, aggressive, hit-four-shots-then-a-winner type of ballgame.

In Paris during the next two weeks, when you watch, you’ll notice that one word lords above all: Patience. Because when the tennis ball lands on the thick, red clay it doesn’t skid or jump—it bounces high and slows. On the “terre battue,” as the French call the surface, players can retrieve shots that would otherwise have been winners on fast surfaces. Thus, if you’re impatient—like a yellow bullet that pummels your stomach, you’re dead. 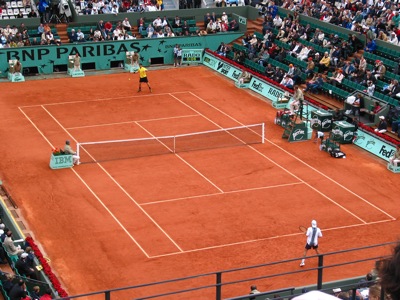 One’s fitness level is also most important. To play five sets in four hours isn’t tiring. It’s draining. It’s debilitating. If a player’s endurance isn’t 10,000 percent, forget it. In Paris, you might as well pack your bags and shop along Champs-Elysees. You can’t win unless your legs are muscular and your heart is, well, muscular.

Which brings me to another point: The Heart. If you’re patient and your fitness level can rival Lance Armstrong’s when he won his seven Tours de France, you still won’t win… without a heart that screams “I WON’T GIVE UP NO MATTER WHAT!”

Which takes me to my final Match Point: Mix all of the above and your soldier boy is named Rafa. 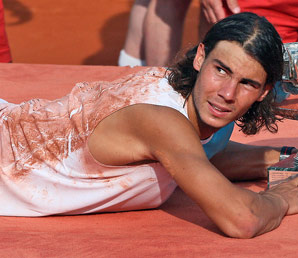