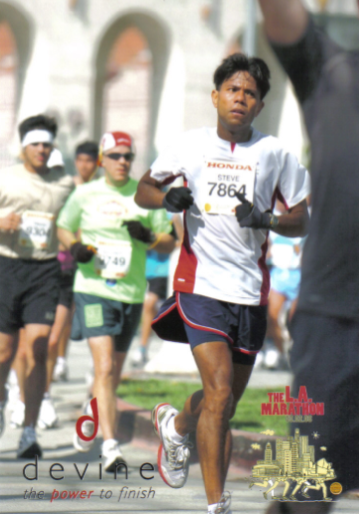 He weighed 228 lbs. “When I climbed stairs, I panted” he told me. “When I rode at the backseat of a car, I’d fall asleep. I was forever tired…”

Steve Ferraren was 35 years old. His waistline was older: nearly 40 inches. And the year was 2001. But back in college, when Steve used to exercise, he stood at 145 lbs. It was only after he graduated, joined the corporate world at Unilab and, next, Petron, and when he hadn’t sweated in years that his weight ballooned.

Then, tragedy struck: His father, Vicente, passed away in 2002 due to complications from diabetes. And when Steve asked the doctors, he was told a painful truth: Diabetes was prevalent in both his parents’ families and, if he didn’t lose weight and indulge in sports… the consequences might be catastrophic.

“And so that year, in 2002,” he said, “I was invited by friends to Abellana (Sports Center). I joined them. My maximum running distance? Ha-ha. It was half-a-round at the oval. I couldn’t do more.”

His weight? From 228, it dropped to 200, then 175. But his weight loss was never achieved after one day or three weeks or five months. “If I have an advice to give, it’s this—” he said, “Never lose weight overnight.”

TODAY… Steve is 145 lbs. But more than his weight loss, he’s found a sport that he’s enjoyed.

“I love running because there’s no discrimination. It doesn’t matter if someone is rich or poor, if one person is a judge or a millionaire or an ordinary man. On the road, you’re all the same. You all make ‘tagad.’ Plus, in running, you can never cheat. If you want to improve, there’s no other way but to exert more effort.”

Six years from when he first tied his running shoes, Steve is no longer your regular 5-K runner. Among Cebu executives, he’s one of speediest. 10-K? His best time is 44:52. The 25-K Tri-City Marathon years back? He placed second to elite runner Nogi Biagan. But Steve’s best achievement? It’s crossing the 42-K marathon finish line three times.

In 2006, he ran the Pasig Marathon and, despite severe stomach pain, he finished in four hours, 49 minutes. The following year, he joined the Milo Marathon. Once more, pain struck as he succumbed to leg cramps halfway through. Yet, he still finished in 4:32.

Then, finally, just last month, he ran beside 25,000 others and joined one of the world’s biggest races, the Los Angeles Marathon. After six months of training which included a week where his mileage topped 123 kms., Steve’s goal was to go “sub-4.” In running parlance, that means: “under four hours.” 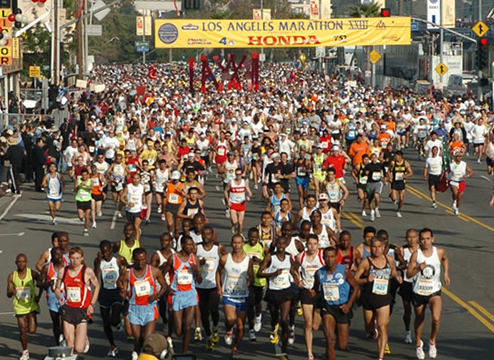 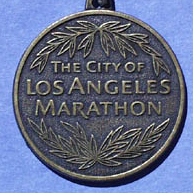 “I could have done sub-4, but I made a mistake,” he said. “I started my stopwatch when the starting gun fired, instead of when I stepped on the starting line, and so, towards the finish and when I had cramps, my watch read past four hours and I slowed down… not knowing that I was below four hours and had more than enough time.”

Still, with a personal record (PR) and after vacationing for 28 days in San Francisco and Las Vegas with his wife, Nanette, no regrets echoed from Steve’s voice when we spoke for 25 minutes yesterday. 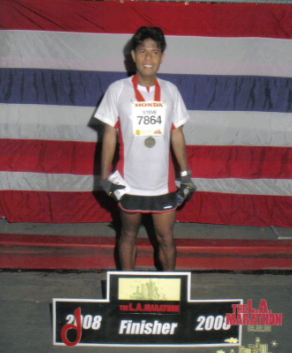 When I asked Steve, who’s the Vis-Min Marketing Manager of tire importer SG Express Mktg., for his final advice, he answered: “Choose a sport that you love. Because if you love it—like I do with running—then you’ll be motivated and won’t stop.”

Only 42 years of age and having lost 83 lbs., Steve has no signs of stopping. He is lean, long-running, fast. And, just like that red Italian sports car that we all know, I’d like to call him…. Steve Ferrari.