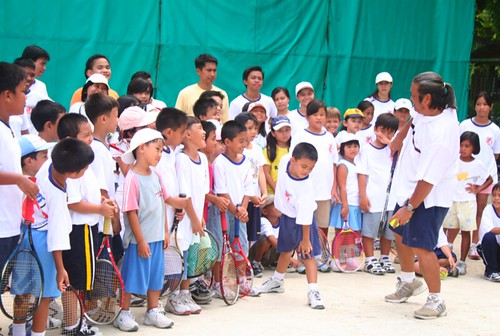 Next week, one of the nation’s top tennis coaches will descend in Cebu. No, he won’t be here for a mere three hours or three days or three weeks—Butch Bacani will reside in Cebu for one month. At the Casino Español de Cebu along V. Ranudo St., Bacani will train children as young as five years old, he’ll hone the skills of top juniors like Niño Siso, and he’ll impart his decades-long experience to anyone dreaming to be a future Roger Federer.

Who is Butch Bacani? He was a U.P. professor turned Cummins Diesel manager turned professional tennis coach. Name almost every No.1 Filipino of the past few decades—Felix Barrientos, Joseph Lizardo, Jennifer Saberon and current top junior Niño Alcantara, to name a few—and he’s helped train each one. He’s been a Davis Cup captain and has taught under the tutelage of the legendary Australian coach Harry Hopman.

Next week—from April 25 until May 16—he’ll be in town for the Smart/Butch Bacani Tennis Camp. This promises not only to be our city’s premiere tennis camp but also the least expensive: to join, you don’t need to pay P2,500. All you need to be is a Smart subscriber or to show that you’ve bought a Smart SIM pack—and you join for free. How to register? Call Ging-Ging Astilla at 416-1122 local 100.