The “Mud-man,” he’s called. On the third hole of the Iloilo Golf and Country Club in Santa Barbara, he swims alone in search of money in a pond where errant golf balls dive. No net to catch, no goggles to see underwater—he searches by hand beneath the pond’s muddy bottom.

“Pa-picture anay,” I shouted, not wanting to miss this rare shot.

Gamely, he emerged from the brown water then flexed his muscles for a pose. I clicked the camera; we chuckled, he laughed. 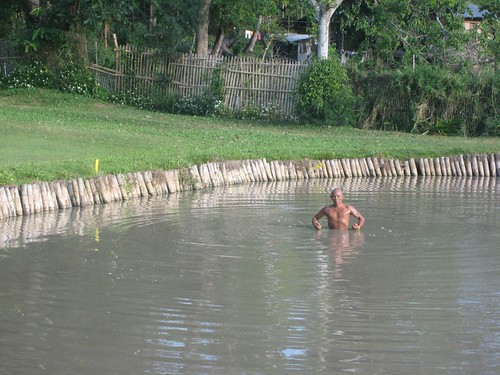 It was 7 a.m. the day after Good Friday last week. Standing on the tee mound of the first hole, I shook my head. Then pondered, “Why, in golf, on your very, very first swing, doesn’t this sport give you a practice shot?”

That’s true. While, on the basketball court, you take 25 minutes to practice lay-ups and shoot free-throws and, on the badminton rectangle, you spend 15 minutes lobbing and smashing—this “Can I practice first?” philosophy doesn’t apply in golf.

And so I swung. Down the ravine. He-he, I grinned, beginners’ bad luck. I swung again. It was a “hook shot” that Kareem Abdul-Jabaar would envy. One last time, I tried. Yes! Finally, the ball flew above the water.

We were three: my wife’s uncle, Tony Baluyot, a golf fanatic whose Jacksonville, Florida home sits near a golf course; and the husband of my wife’s cousin, Rytch Pranga, a golfer-turned-badminton-player who operates a Caltex station in Silay City near Bacolod. 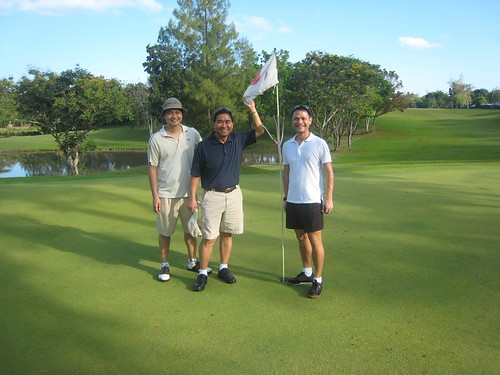 We had fun. Never mind the score, never mind my non-golfer attire of plain white T-shirt, tennis short-shorts and black Puma rubber shoes, never mind the words “slice” and “tap ball” and “kulang follow-through, sir!” that I repeatedly heard from my caddy, Isidro (below)—we had fun. 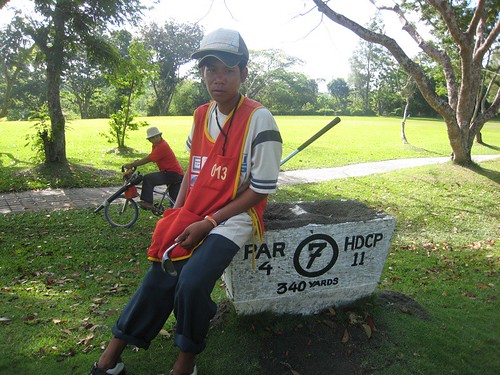 Consider this: They called me “Ironman.” Nope, unlike Cebu’s very own RP triathlon record-holder Noy Jopson, I haven’t swam 3.86 kms., biked 180 kms., then ran a 42-K marathon. They termed me “Ironman” because the only clubs I used were irons.

Day? A week? Per month? No. Twice a year. And whenever I swing that oversize club called “The Driver,” my shots are pulled at the sides by magnets. There’s a gravitational pull and I never hit straight. (I recall, the first time I played on a golf course—with my buddies Macky Michael and Louie Moro at the Alta Vista—I lost 22 balls. No kidding.)

But using only a 7-iron in Iloilo, I turned accurate. I didn’t mind not hitting far as long as my shots didn’t zigzag. 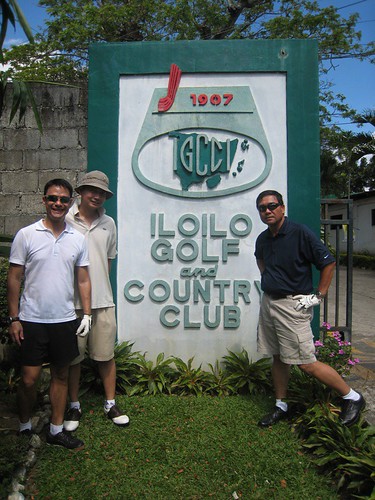 More funny episodes? Here’s another: We were on the 5th hole and my ball, after two shots, landed on the rough, a few meters from the green. But instead of using the pitching wedge (which I couldn’t control well), I used a putter. Aiming at the pin 40 feet away, I swung…

Smack! Would you believe, my ball ran straight, hit the ball of Rytch that was lying on the rough, as our balls ricocheted to different directions. We burst in laughter. I’m not sure plenty can say this: We played billiards on grass!

How’s the Iloilo golf course? In excellent shape. Compared to a few summers back when I first played there and we walked not on grass but on hard, rough, rock-like terrain with plenty of cracks, this time, the course is in tip-top condition. Why? Because the members have upgraded the course and facilities in time for the club’s 100th year anniversary last year. 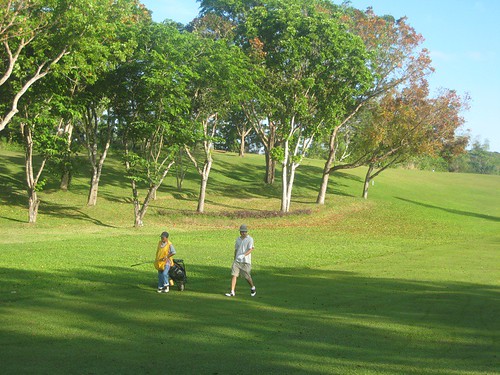 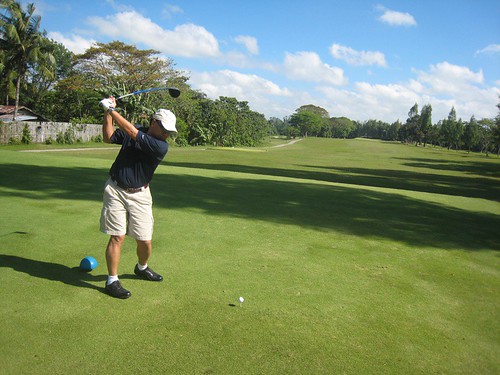 But to me, my uncle Tony and Rytch, the score was irrelevant. It was the camaraderie. The nature walk. The historic surroundings knowing that Santa Barbara, built by Scottish engineers in 1907, is the oldest existing golf course in the Philippines. It was the bonding. The wind swirling as you walk on the manicured greens. The family talk. The laughter of seeing “Mud-man,” the improbability of doing a Bata Reyes on grass.

This game, they say, will hook you? You bet. Take it from my hook shot.