Tennis’ greatest-ever—next to Roger Federer—is Pete Sampras. He amassed 14 Grand Slam singles titles—the most of any male player. But we know he’s long retired; back at the 2002 U.S. Open final against Andre Agassi, Pete won that match—his last on the ATP Tour. And that was 5 ½ years ago. 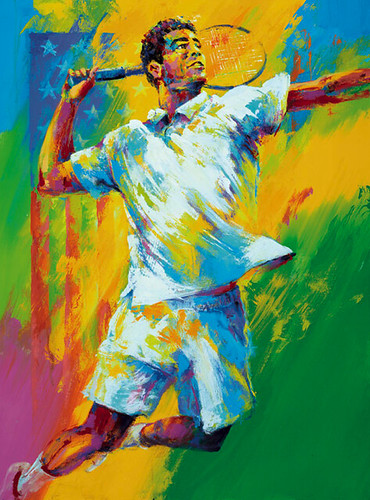 (This painting and the one below from www.galleriadelsol.com)

Which brings me to ask: Should Pete return?

“I could still play a little bit, still play at a pretty high level, but coming back is a whole different ballgame, whole different lifestyle, a lot of work,” said Sampras. “The day-in, day-out grind of tennis isn’t in me any more. I still enjoy playing a few exhibitions here and there, but to come back, I don’t really necessarily play just for the limelight or for the money. I play to win.”

Well, Pete, didn’t you just win against Roger? And embarrassed the former no. 2 Haas a few days ago?

You did. And granted that you no longer want to spend hours waiting at airports and sleeping in hotel rooms and, as you said, you “play to win,” I offer a suggestion: Why not play Wimbledon? Yes, just one event… Remember the All-England Club? Remember how you used to stroll through their steel gates as everyone bowed while you picked up the trophy? On the first day?

Wimbledon, lest we forget, stood for one line: PETE SAMPRAS’ HOME. Nobody in history felt more relaxed on Wimbledon grass than Mr. Wimbledon himself. He won seven crowns. And, my contention is, if Pete focuses one last time on London, he has more than a good chance to do well—he can win it.

Why? Haven’t I seen enough of old, balding past champions who married, raised children, played golf, smoked cigars, and lounged on their swimming pool chairs… then they un-retired… and embarrassed themselves?

Yes. Michael Jordan tried. And, for a moment, we thought MJ still had “it” until 21-year-olds fifteen years his junior banged his body and he’d ache all over and look, yes, like an old, balding man. 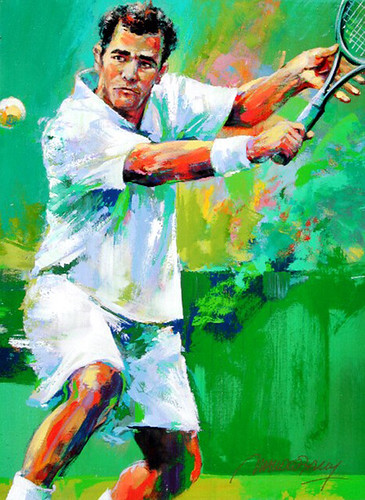 But Sampras taking on Wimbledon—just the ‘08 Wimbledon—is different. Here’s why:

Reason no. 1: He can focus on grass when nobody else does. From now until June—that’s four months—while others play on cement and clay, Pete can practice on green grass. Imagine that advantage. And since there are only, what, three or four events on grass prior to Wimby… then what a plus for Pete.

No. 2: Nobody attacks the net anymore. Wimbledon today is all baseline play—unlike before. The reason is because there are no net-rushers left like Sampras. So his style will unnerve and rattle his enemies…

No. 3: In Kuala Lumpur last Nov., when I saw him play, he serve-and-volleyed and Roger couldn’t break his serve. His service—considered history’s best—are as good as 10 years back during his prime. He’s still un-“breakable.”

No. 4: Pete, today, plays with a larger Wilson racquet and uses hybrid strings. “I experimented a bit and kind of found a combination that I like — you can still swing hard and have control,” he said. “It’s a great combination. It’s almost like cheating.”

Of course it’s not cheating, Pete. Everybody uses new-technology racquets today. Considering that Pete won seven crowns using the old racquet, imagine his game with the new one.

My conclusion? At Wimby, Pete will beat Hewitt, Davydenko, Gonzalez, Nadal and Djokovic. He’ll reach the quarters, semis, the finals…

And will face, who else, but the Federer Express. And what a scenario: One has won seven, the other five straight. One has 14 majors, the other 12. One is The Great One, the other, soon, The Greatest One.