It doesn’t matter if you’ve never swung a Wilson tennis racquet before, I hope you saw the Men’s Final of the Australian Open last Sunday night. The first set? It was all a tussle and grapple of physical will.

Jo-Wilfriend Tsonga, all of 6-foot-2 and built and looking like Muhammad Ali, sparred against the 6-foot-1 1/2 Novak Djokovic. And, just like the way he demolished Rafael Nadal in the semifinals, Tsonga won the first set.

Then he started making errors. Then Djokovic started to play like the world’s no.3 who had just beaten Roger Federer two days earlier. Novak won the second set. Next, the third. And, just when we proclaimed the match was over, Djokovic limped. He looked weary. A trainer was called to massage his legs while Tsonga bounced and was ready to pounce. But in the end, after a fourth set tiebreak, Djokovic collapsed to the ground in victory to claim his first-ever Grand Slam title. 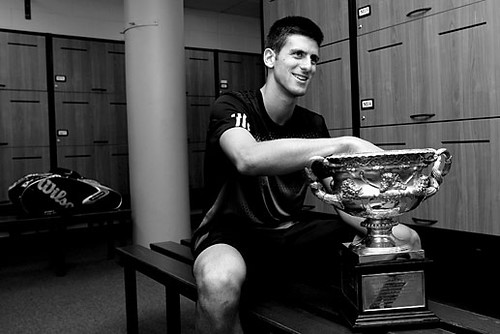 My thoughts? A few…

Had Tsonga converted on that break point in the 11th game of the fourth set, he’d be the Last Man Smiling. He’d have won the fourth set and, with Novak limping, captured the Oz Open trophy. Still, he couldn’t have been happier at week’s end: For who’d have thought (him included) that he’d beat several players in the Top 15 and reach the finals? His game reminds me of Marat Safin: fearless, athletic, all-power.

Djokovic is a nice guy. He clapped when Tsonga rifled winners past him and, though he does impersonations of Sharapova and Roddick, they’re all meant for clean fun. What a personality for a future world no.1.

Finally… wasn’t it refreshing to witness a Grand Slam final not contested by R and R? 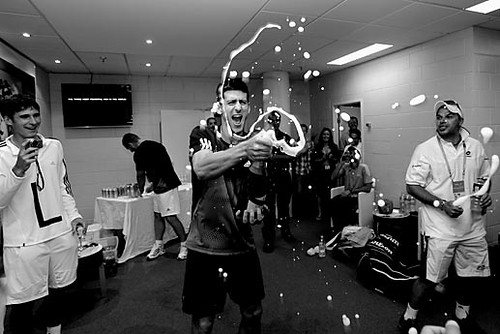