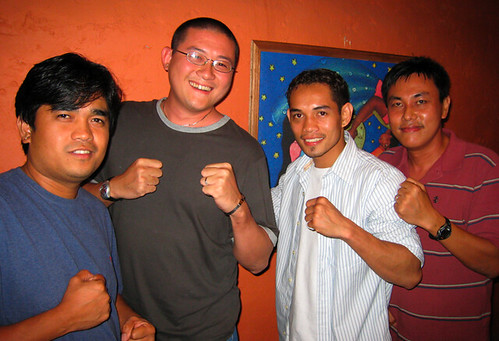 He’s handsome, single, turned 25 years old when he celebrated his birthday in Cebu last Nov. 16, he’s world-famous, makes ladies swoon when they stare at his shiny left-ear stud, he weighs only 111 lbs. but can wrestle a 245-lb. gorilla, was born in Gen. Santos City—where his idol, whom you probably know, lives in a mansion today—but moved to California when he was eight years old, he’s met countless of celebrities before but recalls his meeting with President GMA as “an overwhelming feeling… indescribable.. a great honor,” and, best of all, he’s someone you’ll see on TV this morning.

Sen. Antonio Trillanes IV. No kidding. Yes, if you watch the news, you’ll see the embattled senator. But, if you stay longer and watch TV the whole morning, you’ll see another type of fighter. One who, like Trillanes, also claims to “fight for his country.”

Nonito Donaire, Jr. No kidding: If you don’t watch long enough, you might not see Donaire. You see, his strength is his speed: “I can run one oval, the 400 meters, in 50-plus seconds,” he told me a few weeks back. That’s blistering fast. No wonder he’s called the “Filipino Flash.” 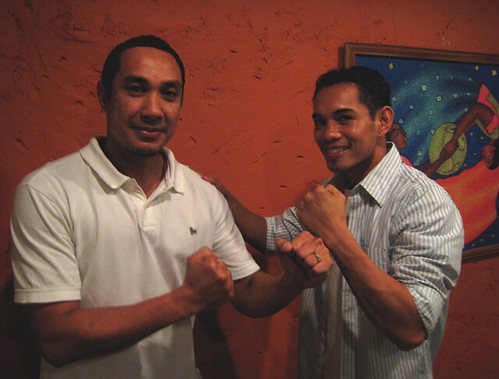 I had the chance to spend a few hours with Nonito and his father, Nonito, Sr., and must say that he’s not your typical boxer. I’m not saying all boxers are ugly—look at Oscar de la Hoya—but they’re usually not well-dressed, clean-cut and, if they’re Filipino, not mestizo.

Donaire is. Plus, he’s got one bonus weapon apart from his speed: His intelligence. (Having lived for 17 years in the U.S., he speaks excellent English… and good Bisaya.) He’s witty and funny. Like, for example, do you know how he calls Nonito, Sr.? Not “father” or “dad” but “this guy.” No disrespect to his father but that’s how he calls him: “This guy.” You see, father-and-son are a funny combination. But this morning, the Donaires will be all-serious. We wish Nonito… good luck!

Father and son seated with some members of the Cebu media

BOOM. At the Araneta Coliseum this morning: Questions, questions. Will Rey Bautista erase the memory of his last fight and, like he’s done in his 23 previous fights, win? And win by knockout? We hope so. We think so.

I spoke to Michael Aldeguer, the manager of Boom-Boom, at 1 p.m. yesterday after the weigh-in and here’s what he said: “Boom-Boom’s ready. He’s waited a long time for this. He’s trained hard to prove his critics wrong… Meza is tough. He’s ranked world no.19—higher-ranked than Bautista. Both fighters came in at 121 lbs. But during fight time, Boom-Boom will add nine to 10 more lbs. to weigh in at 130 lbs. AJ Banal? This will be his toughest fight ever.” 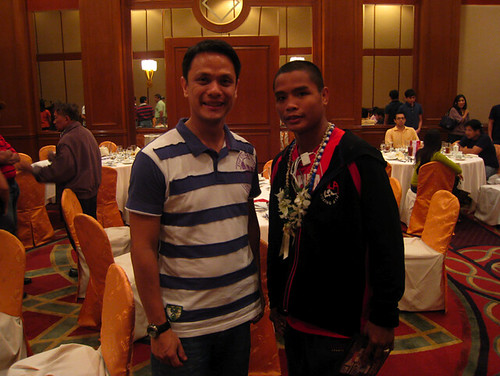 Cebu City Councilor Jack Jakosalem I also called yesterday. He was in Manila and attended the weigh-in. Joining him at ringside for the fight? Vice Mayor Michael Rama (who’s flying in from Cebu at 4 a.m. today) and Councilor Yayoy Alcoseba.

What’s the TV schedule? As reported by Salven Lagumbay in www.philboxing.com, “First bout starts at 9AM, while the ‘live’ telecast will start 10:30AM over ABC-5, according to Eala. ‘Donaire’s fight (on GMA Network) should start around 10:30 AM and we will pause for a while to see that fight on the big screen at the Araneta, then continue the fights afterwards,’ said Eala.”

Isn’t this perfect? For sports fans? For boxing followers?

Today—though we won’t see Manny Pacquiao—is as big an RP sports morning as we can ask for. I suspect traffic will halt the nation’s streets and the usually-filled 11 a.m. mass will be half-empty.

All because of two gladiators. And they’re not all. Will AJ Banal continue his undefeated streak? Was Michael Domingo’s win during the World Cup of Boxing not a fluke? Is Rocky Fuentes for real? Who’s Joseph Omanz? 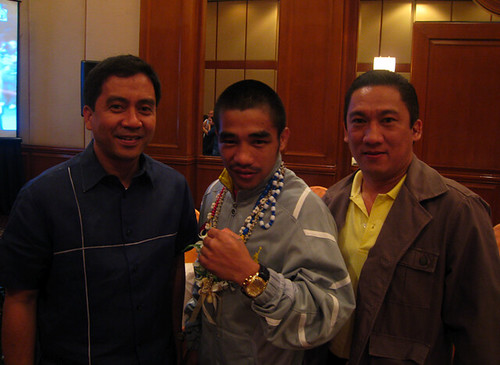 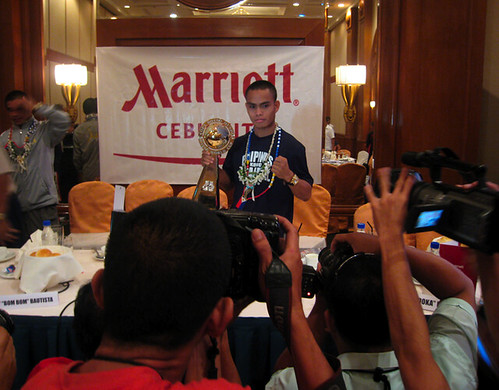