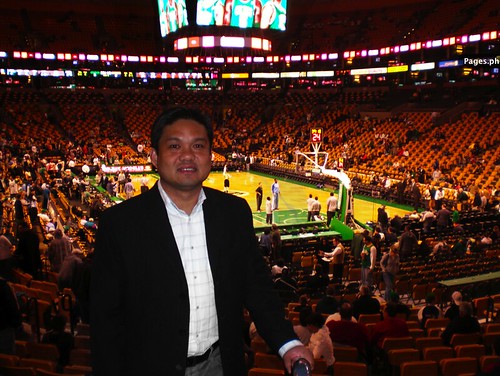 “I was in Boston from Nov. 6 to 11 for our Annual Meeting of the American College of Rheumatology at the new Boston Intl. Convention Center. The topics were great but we were more excited to watch the game between the Boston Celtics and Denver Nuggets. I have long been a fan of the Celtics since the era of Larry Bird. Visiting the Boston Garden is one of my dreams. Well, it became true last Wednesday, Nov. 9. Boston Garden, now named Banknorth Garden, is huge but it wasn’t difficult for me to spot the #33 jersey among the retired numbers that hung from the roof.

“Boston Celtics, so far, the only undefeated team in the NBA has the big three: Kevin Garnett, Paul Pierce and Ray Allen. But the Nuggets came into the Garden with their own Big Three of Iverson, Melo and Camby. We thought we were on for an exciting game. But it was one-sided from the start. It was an onslaught! The Celtics were incredible. It was like watching a basketball game between the Chong Hua Medical Team versus the UV Lancers! Half time, I think, was 33 and 77. We ended up not enjoying the game so much but enjoyed watching the rowdy Celtics fans and, most of all, the CELTICS DANCERS!”

SAMMY. While checking in at the Manila Hotel yesterday, guess who I saw at the lobby? Don King. Nope, not the American promoter with the spiky, electrocuted hair. But Don King of the Philippines… Sammy Gello-ani. He had been in Manila for the past five days to attend the WBC Convention and, without wasting a minute, Sammy pulled me over and introduced me to his two friends. “John,” he said, “this is Oscar Larios.” Oh, wow. “I saw you fight Manny,” I told the Mexican. He smiled. Next, Sammy introduced me to one of boxing’s top promoters: the No.2 man of Oscar de la Hoya… Eric Gomez.

KL. Tonight, with my wife Jasmin and doctor Ronnie Medalle and his wife Steph, we fly to Kuala Lumpur for a five-night visit. On Tuesday, we watch Rafael Nadal vs. Richard Gasquet and, on Thursday at 8 p.m., Roger Federer vs. Pete Sampras. I called my friend from KL—his name is Suresh Menon and he’s the International Tennis Federation head there—to ask for entrance tickets for the Federer-Sampras cocktails party. He said no, it’s exclusive for government heads and sponsors. That’s too bad. Which leaves me hoping to attend the Press Conference—and be up close with tennis’ two greatest-ever.

Four Cebu tennis players will also be in Malaysia for the next three weeks. Bernardine and Sally Mae Siso, Jacob Lagman, and Mac-Mac Tabotabo will join four junior events starting Nov. 21 in Malaysia. With the Siso siblings (who’ll be joined by their mom Sally), their trip was supported by one of Cebu’s top businessmen, the CEO of Primary Structures Corp… Wally Liu.

MASTERS CUP. Last night, the semi-final matches were played between Federer vs. Nadal, and Andy Roddick vs. David Ferrer. I saw a replay of Federer’s 6-4, 6-2 win against Roddick and, must say, RF is ridiculous. He makes the game look so easy. And it’s not. Words to describe him? Effortless. Graceful. Cool.

Nene Palmares, a good friend (and former coach and CAAA MVP), called yesterday and said: “You missed one-half of your life if you didn’t see that amazing game. I don’t play tennis but was in disbelief at the talent of Federer.”

MARATHON. Very timely, I’m here in Manila for the 31st Milo Marathon. I’m staying near Luneta (where it starts and finishes) so will catch a glimpse of the 42-K runners. There’s also a 10-K run and so, I just might jump in and join the crowd.

JOKE. What do you call two Mexicans playing basketball? Juan on Juan.