I did. You did. My father-in-law Jack Mendez did. So did my companions that morning, Dr. Ronnie Medalle and my Sun.Star sports editor Mike Limpag. Every single Filipino who sat to watch from 11:30 a.m. until 3 p.m. two days ago prayed for Manny Pacquaio. My mother-in-law Malu Mendez, too nervous to sit, instead prepared kinilaw at the kitchen and did what she does best when in times of need: pray. 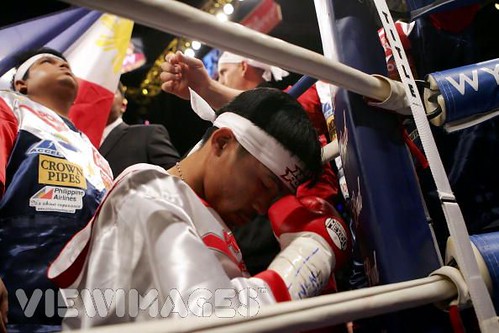 Manny prayed for Manny. With a rosary hung around his neck, he made the sign-of-the-cross each time the bell sounded to start the round. Do you recall him, midway through, looking up to the ceiling? He wasn’t staring at the scoreboard—this wasn’t the NBA—but looked up… to pray.

The day before the fight, when we watched the news that Manny was four lbs. overweight when he awoke that morning and had to run on a treadmill and squeeze out the extra poundage just to make weight—didn’t we all pray? Didn’t we all uplift Manny’s ordeal? For him to have strength 30 hours later to last the full 12 rounds?

Manny also heard mass at his Mandalay Bay suite—as he always does—and invited all to attend. Plus, didn’t Manny kneel down after the fight? To thank God? He did. He always does.

I’m sure Marco Antonio Barrera prayed, too. He wore the same rosary entering the arena. But herein lies the difference: While the two warriors prayed, while their entourages held masses, and while the Filipinos and Mexicans both said their “Our Fathers,” Manny and Marco were two contrasting Catholics on the ring.

Manny was good. Marco was bad. And, of course, we know who God looks favorably upon, right?

Marco was dirty. His split-second stab while Manny had his arms down and the referee stood in the middle reinforced what plenty suspected: Barrera was a dirty fighter.

The knockout punch we all awaited from Pacman? That KO win thousands bet on Manny to produce? It happened in the 11th round. It should have. I watched the replay at YouTube (just type “Pacquiao 11th round”) and, after a barrage of rapid-fire shots from Manny with 49 seconds left on Round 11, Barrera backtracked and wobbled. With 49 ticks left, Manny had time for a KO.

Until Barrera did the un-Christian act. No wonder he lost.