Dr. Peter Mancao runs. From his clinic at the Cebu Doctors’ University Hospital to his patients‘ rooms to the Operating Room where he presides as one of the top cardiovascular surgeons—he’s always on his feet, on the go.

But exactly seven days from today—on Nov. 4—Dr. Mancao will engage in a different run. Yes, he’ll do the same hop, skip and sprint, but this time, not wearing a surgical mask or doctor’s gown. Next Sunday, he’ll wear a pair of Asics running shoes and will sweat beside 40,000 others to run the world’s largest 42-K race: The New York City Marathon.

“You’re supposed to run one marathon in your life,” he told me last Thursday night over the phone, minutes after he reached home after running 10 kms. around the Cebu City Sports Center oval. “And since a runner’s supposed to finish one marathon… then it might as well be the NYC Marathon.”

Why New York? I asked.

“Because if you make it there… you’ll make it anywhere!” he sang. I replied with a big laugh. Isn’t that a familiar tune? “If I can make it there… I’ll make it, anywhere… It’s up to you…. New… York… New… York!”

Yes it is and the good doctor will attempt to run from Staten Island, through NYC’s five boroughs, and finishing in Central Park.

Dr. Mancao, 47, started running 10 years ago when he studied in Houston, Texas. After a few years there, he came back to Cebu in 1998—and, owing his busy schedule, quit running.

“It wasn’t until two years ago,” he said, “when I noticed that I lost my breath climbing the third floor of Cebu Doc. This can’t be, I thought. I’ve got to go back exercising. And so I started running on a treadmill and exercised on a stationary bike.”

Then last year, he met Dr. Potenciano “Yong” Larrazabal III, one of Cebu’s most famous running enthusiasts who’s finished two marathons todate and who’ll also be running the NYC Marathon. At one time in the O.R., the two spoke about running and Dr. Larrazabal invited his good friend to join the University Run in July 2006.

“I thought it was a good idea so I ran to prepare,” Dr. Mancao said. “Then I joined the 5-K race and really enjoyed it. The next thing I knew, I couldn’t stop running.” 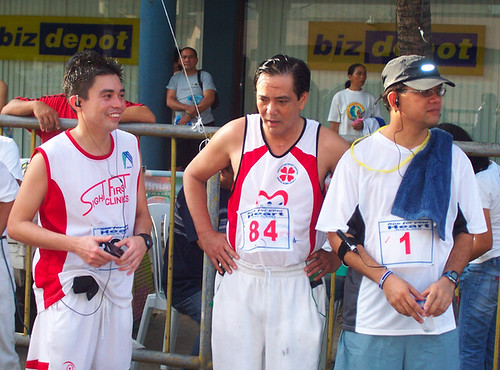 Last March 4 of this year, to celebrate his birthday, Dr. Mancao decided to gift himself with a trip to Hong Kong. No, not to shop or gaze at the view from Victoria Peak—but to run the Hong Kong Marathon.

“I joined the 10-K race and it was an unbelievable experience with nearly 40,000 joining. When I got back to Cebu, I organized the ‘Run For Your Heart’ race. And from the ideas I learned from Hong Kong, we applied them at the race.”

The NYC Marathon? It was Dr. Yong Larrazabal who brought up the idea last July. And so, with nothing to lose, Peter Mancao logged in the NYC website and registered. It was a long shot. Out of the 40,000 who run, almost 200,000 people attempt to join by lottery.

“But we’re lucky because my brother works for a sponsor of the NYC Marathon, Asics. And so I emailed him for help. He sent our names and, late July, we received the good news. We’re going to New York!”

Dr. Mancao has been practicing hard. Using his GPS-enabled watch, he’s logged in 600 kms. since May. He’s ran 20-K distances and today, as you read this, at 6 a.m. he joined the Pink October 10-K run. 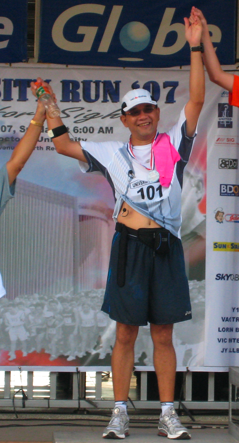 On the podium after one of the races in Cebu

“My wife Sophia and I will leave Cebu tomorrow (Oct. 29), stay overnight in Hong Kong, then fly straight via Cathay Pacific to New York,” he said. “It will be a big family reunion. My brother Noni is arriving from Memphis. My sister Mary is joining us from Alabama. My sister Maida is in New Jersey. And lucky of us, my cousin has a vacant condo unit in Central Park where we’ll be staying.

“And so when I run the Marathon, I’ll have so much moral support. Plus, I’ll have a full logistics team—my family. They’ll be at the 10-K mark, where they’ll hand over food, power gels, etc. Then they’ll take the subway and move to the 20-K mark, then the 30-K spot… until, God-willing I’ll see then all at the 42-K finish line.”

You can make it, Peter. I know you will. And just like Frank Sinatra, don’t forget when you cross that finish line to shout, swing your legs, and dance, “NEW… YORK… NEW… YORK!”