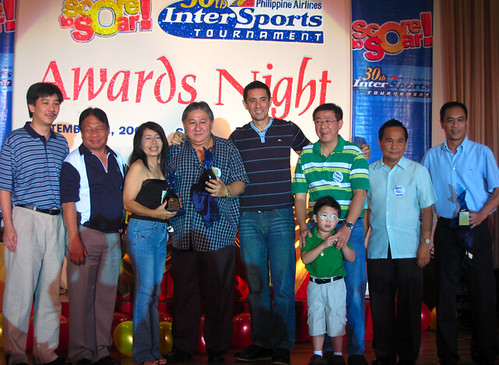 Our bowlers—pardon the pun—bowled over the competition. Really, they did. Led by the husband and wife team (probably the best in the whole country) of Bill (above photo, 2nd from right) and Cynthia Uybengkee, our team composed of Ben Miranda, Ernest Tan, Docdoc Gothong and Sidney Guani won as Team Champion, Team Highest Single and Triple, Highest Men’s Single (Docdoc Gothong scoring 244) and Highest Women’s Single (Cynthia Uybengkee, 180).

Paeng Nepomuceno was a guest. And on Saturday night when he stepped on stage, there was a gasp from the crowd. Paeng is 50 years old but he looks as fit as a 21-year-old bodybuilder. His left arm—the one he used to win four World Cup titles in three decades—was as thick and muscular as any athlete’s leg.