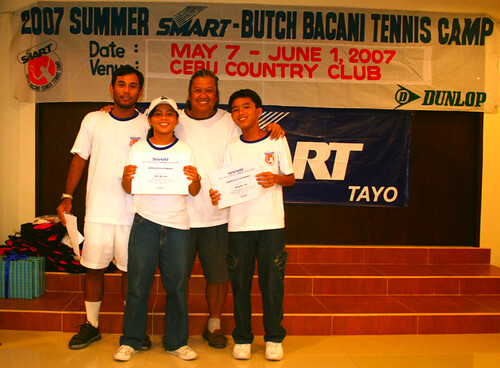 Sally Mae and Bernardine Siso with coaches Butch Bacani (at the back, right) and Mike Mora

You’ve read their three names. Clapped at their trophies. Saw her photo receiving the Outstanding Cebuana award from Mayor Tommy Osmena. Last year, we wept upon hearing of the shocking death of their 40-year-old father, Dino.

Tonight, if you have cable TV, I urge you to tune in to Star Sports at 10 p.m. The show is called “ACE by Sony Ericsson.” It’s no ABS-CBN or GMA-7 production. It’s a weekly tennis show aired all over Asia. Maria Sharapova? James Blake? They’re often featured there. Whose turn is it tonight?

Bernardine, Sally Dine and Sally Mae Siso. It all began four months ago when Mikel Ugarte called to say that Anthony Suntay, the famous TV host, wanted to video a short documentary on the Sisos. I called Anthony, made arrangements for us to meet two Saturdays later at the Casino Espanol and, next thing we knew, the Sisos were being interviewed by Anthony. And so tonight, finally, it’s here: Star Sports, 10 p.m.

ROGER. Yesterday was the birthday of Roger Federer. He turned 26. You know who called me last week, asking for Roger’s e-mail address? She doesn’t write sports. She doesn’t play tennis. But, together with this paper’s Managing Editor, Michelle So, she is the loudest member of the Roger Federer Fans Club in Cebu.

Chinggay Utzurrum. Yes, one of my favorite lifestyle-section writers, would you believe, when Roger played Rafael Nadal in the recent Wimbledon final, she prayed the rosary several times over. No wonder Roger won! You know what, it shouldn’t be Mrs. Utzurrum e-mailing to greet Roger—but Roger calling Chinggay to say, “Thank you!” 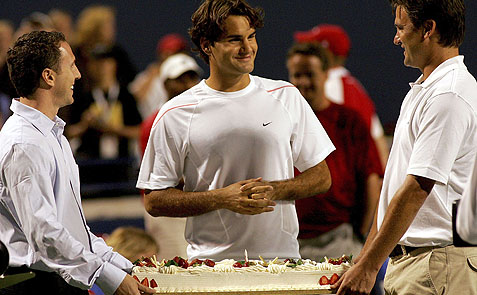 FR. VIC. Think about it: the current Philippine Sports Commission chairman is from Davao. So is Commissioner Leon Montemayor. Another commish, Richie Garcia, is from Bacolod. Same with Monico Puentevella, one of the big names in RP sports.From Cebu? Anyone? No one. Well, not anymore.

This is fantastic news: Fr. Vicente Uy, the VP for Finance and athletic director of the University of San Carlos, was endorsed by no less than PSC Chairman Ramirez to President GMA.

Fr. Vic Uy carries impressive credentials. He is the PSC regional head and Prisaa president. And, maybe you didn’t know this, from the few occasions that we played tennis together—he has a mean topspin forehand. But best of all, in Fr. Vic Uy, the PSC has an honest, committed, passionate and most humble person.