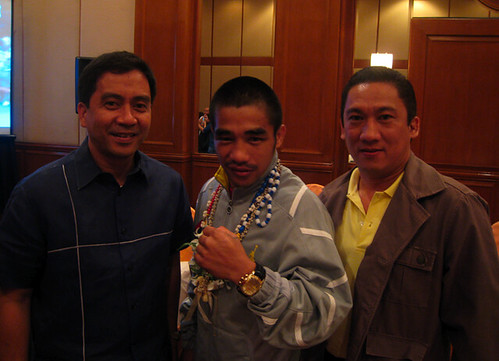 They call him ALA. Pronounced just like the God of our Muslim friends, he’s the Lord of Cebu Boxing. He hails from Iloilo, studied in La Salle Bacolod, built his business empire in Cebu, transformed it into a Philippine conglomerate and, when we speak of the sport named Boxing, he’s conquered Earth.

Antonio Lopez Aldeguer. Is there a sportsman more befitting the title, “Cebuano Great?” He is. Over a span of two decades or more, he has developed and housed and nurtured dozens, hundreds, thousands of athletes with red gloves on their bare knuckles.

Talk about sports tourism? He has done more for Cebu than any other. Last Sunday’s World Cup? Mexico versus Philippines? That wasn’t Mexico vs. RP. That was Mexico versus….. Cebu! For except for Diosdado Gabi, weren’t all the five ring artists sculptured here in our hometown?

Boxing is at its peak today. No less than Oscar de la Hoya is flying to Malacañang—and maybe, to Cebu—to pay homage. Thanks to one man whose passion, generosity, vision and selflessness are as rib-breaking as that left hook of Gerry Penalosa.

ALA, as we stand and applaud, take a bow.

On the presidential table sat Michael Aldeguer, Sammy Gello-ani, coaches (and brothers) Edito and Edmund Villamor, and four names you know: Z, AJ, Boom-Boom and Michael Domingo. They arrived early that morning from Los Angeles. Here are some notes I scribbled…

BOOM-BOOM. He looked fine. His face clean and free of any beating. For if there’s any positive taken from his crumbling to the floor 2.5 minutes in the first round, it’s this: No physical damage done. 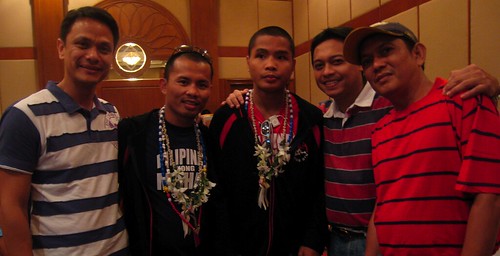 MICHAEL ALDEGUER. Jet-lagged and sleepless from L.A. to Guam to Manila to Cebu, he never lost the passion when he addressed the crowd. Before saying his piece, Michael asked the whole ballroom crowd to accord a standing ovation to the boxers. What a fitting gesture. “We have shown that the Philippines is at par with the best in the world,” Michael then said. He spoke of Boom-Boom. Of his fighting spirit. That despite being hit, he stood up, didn’t run and faced the enemy. That, he said, showed his courage.

NOTES. The $500,000 World Cup? It’s not only expensive—it’s heavy. I held it for a few seconds as Dong Secuya snapped photos. The WC is all-gold and littered with diamonds… The Aldeguers were in full attendance: Michael’s wife Christine (who flew in with the team); Jay and his son Anton; Chris with wife Naya… Each boxer flashed the Icelink watches they received as gifts from Golden Boy. I stared closely at Michael Domingo’s watch. Prize tag? $5,000… “It’s good to be home,” Edito Villamor told me. He had been in the U.S. a full seven weeks… Mandaue Mayor Jonas Cortes, accompanied by City Administrator Briccio Boholst, gave a speech lauding Z Gorres. He spoke of “The Dream” and how we all, like Z, should dream… SAMMY GELLO-ANI uttered, in my mind, the night’s best one-liner: “In boxing, anything can happen.” 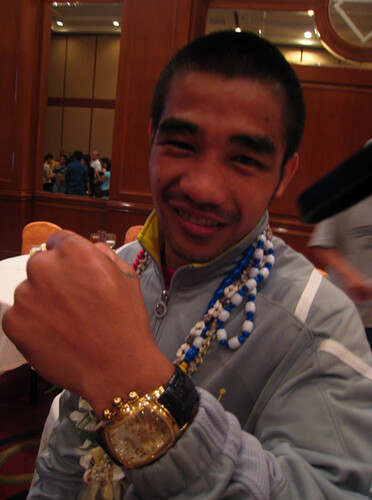 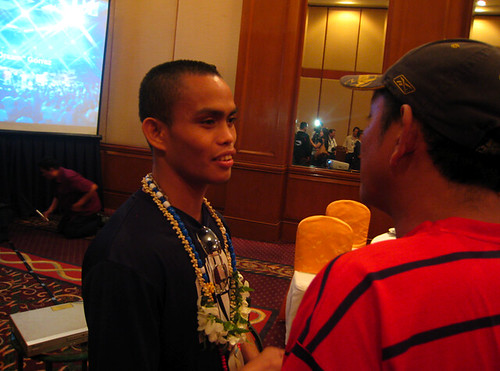