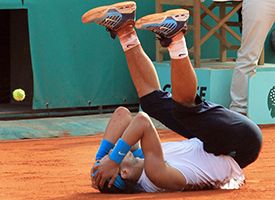 Their white socks turned brown. Hair, disheveled. Frowns covered their faces. They sprinted. Scrambled left, front, right. They banged 22 shots. Then 19. Then 24. Dirt stuck glued underneath the soles of their blue Nikes. Their legs, spring chickens at the first point, wobbled. It was tiresome, grueling and, after over 185 minutes, they still had not finished.

On their fingers, they gripped swords. Rafael Nadal chopped his through the Paris wind while Roger Federer swung and sliced. The red surface they stepped on? The French call it “le terre battue” or red clay. But no, it wasn’t. It was red blood. From the wounds they inflicted upon each other, the rectangle turned into a pool of red blood.

The French Open men’s finals. R versus R. No.1 versus Numero Dos. Right versus Left. Wow. Wasn’t this what the world awaited for 52 weeks?

Last Sunday from 9 p.m. until 1 on Monday morning, together with my tennis buddy Macky Michael, I sat restless and heart-pounding as the warriors weaved their swords. After watching for over two hours, this I told myself: Tennis isn’t easy. It’s tough. It’s painful. Just ask the Swiss Master. He won six of the last seven Grand Slam titles before he stepped into Stade Roland Garros and hoped to accomplish what Tiger Woods had previously done: the “Roger Slam.” 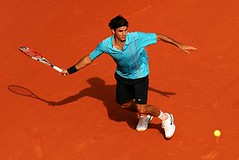 Federer tried. He held 10 break point chances in the first set—but didn’t convert a single one. In all, he missed to capitalize on 16 break point opportunities. Sorry but against Nadal, you don’t do that. You can’t. Because if you do, you’ll end up being labeled by one word: loser. And so Roger, for the third time in three times, lost to Rafa in Roland Garros.

Painful. I watched Roger’s video interview at www.rolandgarros.com. And, just like Sun.Star Cebu’s Executive Editor, Michelle So—who wishes Roger break-up with his girlfriend Mirka Vavrinec so the Swiss can propose to her—I pitied the champ. In the press-con, his head was bent low, his shoulders sank, his voice soft. Once again, he was pained to explain how tennis’ best man emerged, in this Parisian celebration, as the Best Man and not the Groom. 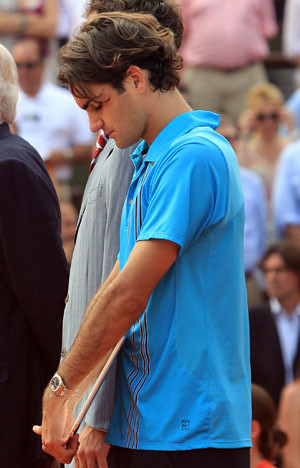 “Well, you can put it any way you want,” said the 25-year-old Federer. “All I know, at the end of the day, is that I’m disappointed today, and I don’t care less about the way I’ve played over the last 10 months or 10 years. I wanted to win this match, and I didn’t succeed. So, of course, it’s a bit sad.”

A bit sad? Come on, Roger. Admit it. You’re devastated. You’re left scratching your head, looking up to the sky, puzzled, in disbelief, and very, very… very sad.

What happened? Can Roger ever defeat this nemesis? Didn’t he just snap that 5-0 losing streak to conquer him in Hamburg? Will he ever win in Paris? Or—like Sampras, McEnroe, Connors, Edberg and Becker—will “Federer” forever be labeled as French Open bridesmaid?

It’s hard to say. Early this year, after he won the Australian Open, I never doubted that before Roger’s career was over, he’d have won at least once in France. Now, after watching Rafa bite the trophy three times, it’s hard not to imagine Rafa winning six, eight or 10 of these cups. I’m serious. Since the 1980s, I’ve watched Mats Wilander, Ivan Lendl, Gustavo Kuerten, Jim Courier and a slew of mestizos named Costa and Moya—but I’ve never witnessed anybody like Nadal. On clay, he’s the best in the past quarter-century. Or maybe, the best ever. And he’s only 21.

Nadal is often compared to a Spanish matador. But no, he’s not. While the matador glides and gracefully swerves left to avoid the bull, Nadal doesn’t. He is the bull. He’s muscled like one, runs forward and barges like one, his face—filled with intensity as he grits those teeth—looks like one, and, to top it all, his appetite to win consumes him like a hungry bull. 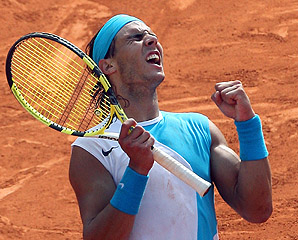 Hunger. That’s what makes Nadal so tough. And sure, Federer can keep up with him during the rallies—but only for a short moment. With Nadal’s topspin left-handed shots, his speed, tenacity, and his will-power, opponents cannot handle the pressure. And so what happens? They crack. Make unforced errors. Their legs turn wobbly. Their minds, dizzy. They succumb to the Nadal pressure.

Remember Novak Djokovic, whom Nadal faced in the semis? After this barrage of artillery shots from Spain, the Serb simply loosened his shoulders, shook his head, and gave up. Plus, he did the one wise move that’s left to do: he made the sign of the cross. Unfortunately, even that didn’t help.

But here’s the best part in sports: Tomorrow. Because to all of Roger’s fans, while your man is sad, in two weeks’ time, when the sun radiates on London and the grass is rolled out, watered, mowed, and ready to be slipped upon, Roger will smile, thank God he’s “Back Home,” and collect that Wimbledon crown No.5.