WHEN the clock strikes 9 p.m. tonight, I suggest you do this: Turn on the cable TV set, navigate the remote control to Solar Sports, and sit down to watch a “live” movie that’s better than Pirates of the Carribean. No. It’s not Game 2 of LeBron versus Duncan. It’s not Bobby Pacquiao against Humberto Soto. Nor is it a replay of the engines that drag-raced and roared at the SRP.It’s Paris… Paris Hilton!

Nah. Just kidding. While her latest soap opera show on CNN riveted viewers, an occasion even more exciting is about to unravel in Paris: the men’s finals of the French Open.

For the warrior from Switzerland, this is what he’s waited for. He’s never won in Paris but, if he does, he’ll have snatched four of the last four majors. He’ll be crowned “French King.”

For the Spanish conquistador, he pumps his fists, clenches his jaws, flexes his muscles and shouts, “I…. am the French king!” So his goal is to grab that crown with his muscular arms, hold on it tight, then affix it to his head so the enemy doesn’t steal it. 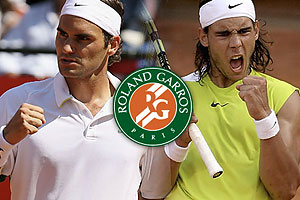 Watch the finals. Please do. Why? Because R and R are opposites. Like McEnroe and Borg, like Sampras and Agassi. They’re antonyms. Roger plays right, Rafa’s a leftie. Roger uses one hand; Rafa has two off the backhand. Roger floats like Mikhail Baryhsnikov; Rafa grinds his enemies to their knees like King Leonidas in “300.”

Here, to me, are three key points of the match:

1.) Roger must take risks. If he’s pinned 16 feet behind the baseline, if he rallies 19 shots against Rafa—he’ll lose. Which means Roger has to be the aggressor. He needs to serve-and-volley, approach the net behind a short ball, fire that forehand topspin and attack.

2.) Roger needs to serve well. His first serve percentage has to hover around the 65 to 70 percent mark. He needs to score free points off it.

3.) Roger must shorten the match. If the battle reaches five sets and five hours, Nadal will prevail. Though Federer is no weakling, Nadal is a thoroughbred horse that can run from noon until midnight. He rarely tires. So the longer the match runs, advantage Nadal.

Here’s the bottom-line: It’s all up to Roger. Can he be the aggressor? Can his forehand penetrate deep? Can he score winners? Can he limit his unforced errors? If it’s yes to all these, then it’s Roger, yes. But… if he fails at any of these pointers, then Nadal will hold aloft his third straight crown.