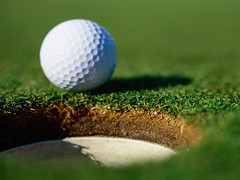 Golf statisticians estimate the odds of a hole-in-one to be as high as 42,952 to 1. That’s for the average club golfer. The insurance companies? Haha. Of course they want to play safe—so they peg the odds at 15,000 to 1. Still, that’s difficult. This means that—if you follow the odds—you need 15,000 swings before you can hole that one shot. Difficult? No. Lucky.

Just from the title alone, you understand the feat. One person. Two days. The same hole. Two hole-in-ones. How impossible is that? Would you believe, the odds to accomplish such a feat zooms to 225 million is to 1. Unbelievable! True enough, it’s an accomplishment worthy of induction into the Ripley’s Believe it or Not!

Dakila Fonacier. That’s his name. Sounds familiar? Of course. He was the former BIR Commissioner. A 9-handicapper, he’s already 60 years old. His first hole-in-one was during the Quarterly Members event the other Saturday (June 9) when he used a 9-wood on the 167-yard par-3 17th hole. I quote the Inquirer’s interview of Fonacier: “The ball bounced once about 3 feet from the flag, then dropped,” he said. The next day, on the same hole, he swung with the same club. Same result. “This time, the ball went a bit higher and had a stronger right-to-left draw, but it landed almost on the same spot and bounced in. It was my turn to go crazy,” he said.

Were those his first aces? Nope. “There were 24 years between my second and third aces,” he said. “Who would believe that I only had to wait 24 hours between my third and fourth?”

IN CEBU. Closer to home, we know of a lot of friends who’ve scored that hole-in-one. I remember years back, Michael Go aced one and drove home with a brand-new BMW. That crazy week—when, if I’m not mistaken, several others shot aces—was especially painful for the insurance companies.

Just three months ago, Alan Larot (photo, below), my close buddy with the Brotherhood of Christian Businessmen and Professionals (BCBP), scored an ace. 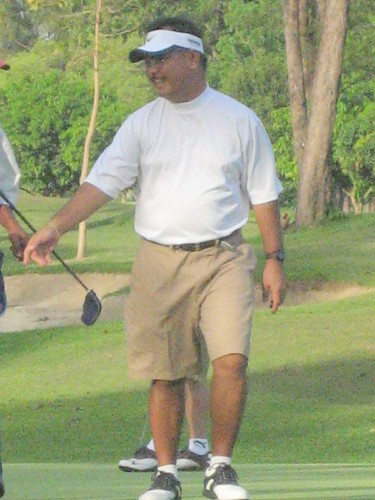 Alan Larot scored his first hole-in-one in March. As expected, it was a once-in-a-lifetime experience. He jumped. High-fived. Grinned from that minute on until nightfall. But the one bad experience that happens when you pocket an ace? You lose your pocket.

“I won the P3,600 pot but that swiftly turned into a P7,000 bill for a lunch feast with Koko Holganza taking care of ordering (also known as recovery shot) the long table of crispy patas, tuna bellies, noodles, chopseuys… everything in the Alta Vista kitchen. For good celebratory measure, Edwin Espina made sure there was good red wine… enough for me to snore through the movie ‘300’ late afternoon with a terrific headache the day after.” 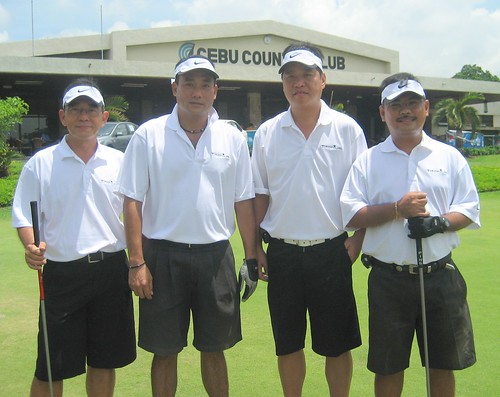 27 TRILLION-TO-1: That’s the odds of three holes-in-one in a 10-minute span on the SAME COURSE. It happened at Sandhurst Club in Melbourne last August 2004, when two golfers aced the 195-yard 15th hole and another golfer aced the 150-yard 13th hole.

HOW ABOUT THIS: 102-year-old Elsie McLean became the oldest golfer ever to score a hole-in-one when she aced the par-3, 100-yard fourth hole at Bidwell Park, California.

You never know. Nothing’s impossible. At 102 years old, that’s a lot of golf time. Maybe she swung 27 trillion times before scoring that ace.