Among all the sports that dribble, bounce and fly in our city, one of the newest is Flag Football. It’s been sprinting on the green lawns of Cebu for only three years now. It’s still an infant. Right? Not true. The Cebu Flag Football League (CFFL) now boasts of over 550 active members. Quarterbacks. Wide Receivers. Men. Women. Yes, lots of girls. Spiked shoes. Bandanas. Shin guards. Flags sticking out at the hips.

What’s flag football? It’s a sport you should watch. Or, even better, if you’re athletic, quick, and aggressive, a game you should try. Flag football is a version of the American Football, played with the same rules and objectives but—and here’s the important “but”—without the painful tackling that leaves many with dislocated joints or bloodied noses. Because of this “less physical” style, flag football also doesn’t use expensive equipment like helmets and shoulder pads.

What the players wear are “flags” strapped around their waists. These flags the opponents try to rip off and, if they succeed, that signifies a tackle. The point stops. It’s on to the next play.

So here’s what transpires: A game that’s speedy, challenging, in need of both physical prowess and mental planning. A game that enhances skills like running, catching, teamwork and coordination. A game that’s safe—safe enough for anyone to play regardless of age, gender, agility and skill level.

From their name alone, The Sharks could not be bitten. Like any shark swimming beneath the ocean, they owned the ocean; they were too strong, too fast, too powerful. They won. 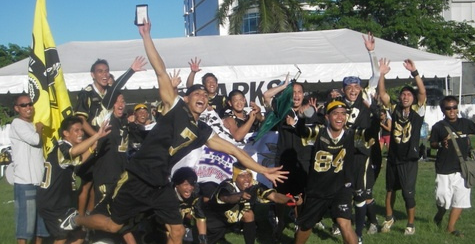 But in the women’s side, it was a major upset as the previously undefeated Sharkettes (ladies team of The Sharks) lost 7-0 when Madille Salinas led the Dark Angels team in scoring the only touchdown of the game.

Harry loves the game because he plays the game. He is both Wide Receiver and Playing Coach of The Sharks. “In Cebu,” Harry tells me, “flag football has been here for only three years but in Manila, they’ve been playing it for over five years now.”

But guess what happened earlier this year? Despite Manila having the two-year head start, despite their being able to recruit thousands more of players given Manila’s population—guess what happened? Cebu beat Manila in the national finals! The Sharks won the men’s national title; The Sharkettes won the women’s. It was a sweet sweep. 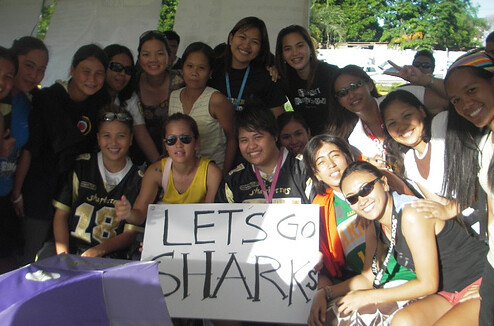 “All teams have confirmed joining the next league in September,” he said. “When we started it was 5-on-5 with no contact. We have slowly elevated the level of play to finally get to the ultimate format: 9-on-9 full contact downfield blocking. As close as you can get to the real NFL. The only difference is the ball carrier CANNOT be hit. Contact is legal for everyone else.”

Uh-oh. Didn’t I just say flag football wasn’t painful, that no one would get red liquid splattered on his face, and no broken bones? Yes and No. No full-contact games will be played. Full contact games will emerge. Everybody gets a choice.

Out-of-town events? Harry points to the Boracay Bowl from Oct 31 to Nov 2, and in Panglao, Bohol in April 2008. “There will also be CFFL Clinics this August,” he adds. “Anyone interested can visit us at http://cebuflagfootball.blogspot.com.”

Interested? Don’t delay. This game requires a sprint. Lest you be devoured by the Sharks.

And finally, the winners for Season 8: