Of the year’s 366 nights (yes, that includes Feb. 29), the one evening I enjoy the most happened last Saturday. It was the 30th SAC-SMB Cebu Sports Awards.

As president of the Sportswriters Association of Cebu (SAC), I was fortunate to have stood on-stage and overlooked all of Cebu’s top sports personalities. Including three nights ago, I’ve presided over four Awards Nights: In 2009, we had Manny Pacquiao as guest speaker. Two years ago, it was Antonio Lopez Aldeguer. Last year, the “Year of the Azkals,” we had the “founder” of the Azkals, Dan Palami.

Last Saturday, our guest of honor was Chito Loyzaga, the former PBA superstar and now one of the commissioners of the Philippine Sports Commission (PSC). 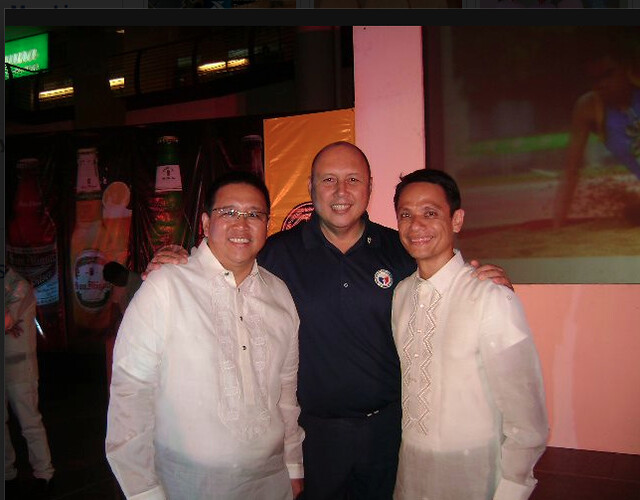 Why was the 30th Cebu Sports Awards special, apart from gathering under one open roof all of our elite athletes? “The reason why Cebu sports is one of the nation’s best,” I explained to Mr. Loyzaga in my Closing Remarks while standing beside him on-stage, “is because of those two gentlemen there seated beside each other.”

I then requested the two to stand and be applauded. Edward Hayco and Harry Radaza. For the first time in a major gathering, the sports leaders of Cebu City and Lapu-Lapu City sat alongside each other, exchanging stories and ideas. Thanks to Ed and Harry, Cebu is a leader in sports. 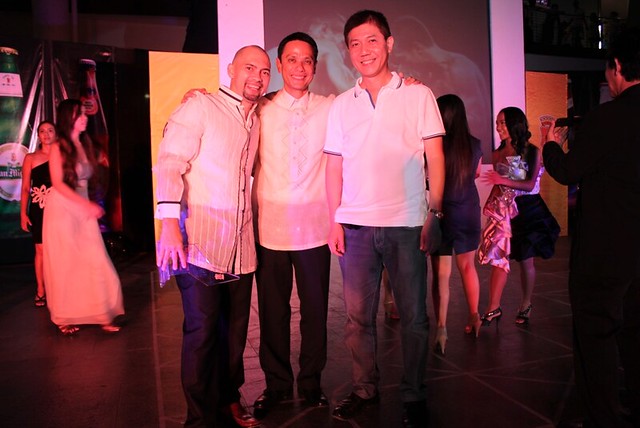 With Harry and Ed

AWARDING. Nearly 200 athletes were honored. Mary Grace de los Santos and Mary Joy Tabal we could hardly recognize because they wore glittering dresses and high-heels — so different from their sleeveless-shirts and running shoes.

AJ Banal, Milan Melindo and the ALA boys were there. So were Sammy Gello-ani and Leon Panoncillo. The one who looked most stunning? Lorhiz Echavez-Lopez, who wore a sexy, body-hugging dress… and she just gave birth seven days ago!

Also looking pretty were the lady-sportswriters, who all wore dresses. And us, gentlemen, barong-tagalog.

PRESENTATIONS. The University of Cebu (UC) Cheer Dance group opened the event with a performance that included cart-wheels, balancing acts, and up-in-the-air flips.

Carmelli Garrovillo, prior to her receiving her Special Citation trophy, danced. She’s a multi-awarded gymnast. Then, Johnlery Caniga and his Yaw-Yan team did a Mixed Martial Arts demo.

Then, for the finale, Dancesport Team Cebu City re-enacted their “Human Chess Dancers” performance that was part of our Guinness World Record chess attempt.

ATHLETE OF THE YEAR.  This was awarded to one of the few chess Grandmasters of our nation: Richard Bitoon. As editor Mike Limpag pointed out yesterday, chess is the big winner of the 30th Cebu Sports Awards. 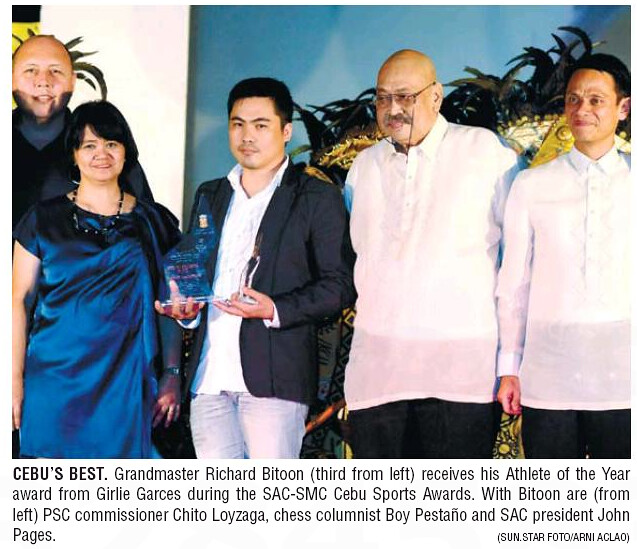 GIRLIE. Without San Miguel Brewery, Inc., represented by Girlie Garces, the event would not have happened. SAC and SMB have been partners all these 30 years. Thanks, Girlie!

HARRY. The speech of the night? It belonged to the man who received the “Sportsman of the Year” trophy: Lapu-Lapu City Councilor Harry Radaza.

I had the chance to work with Harry last year on two projects. Exactly one year ago today, we hosted the first Phils. vs. Japan tennis event of the Davis Cup. Then, in September, another Davis Cup tie: Phils. vs. Chinese-Taipei (Taiwan). Apart from tennis, Harry organized PBA games, multilple road-running events, Pinoy Pride boxing clashes. Plus, of course, there’s the Hoops Dome.

In his acceptance speech last Saturday night, Harry joked the athletes: “My love for sports started when I was seven years old and I won third place in a swimming competition.” The crowd clapped. “We were only three participants!” he added, drawing laughter from the audience.

Harry also delivered the most memorable line when he ended his speech by  saying… “As soon as I wake up in the morning, I read the newspapers. And the section that I read first is the sports section. Why? Because unlike the front pages that talk about people’s failures, you guys, the sportswriters, write about people’s accomplishments.” 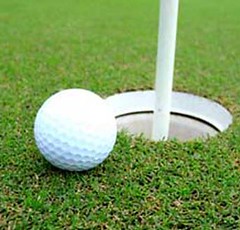 Atty. Jovi Neri calls the Philippine Airlines (PAL) Interclub event that finished last weekend, “The biggest and most prestigious golf team tournament with a 65-year history and around 800 players joining.”

Jovi has been part of the CCC squad since 2003. The past 10 years, they’ve won the Founders’ Division seven times. “We stuck with the same core team while others disbanded because their players turned professional. This moved us up to the Championship Division where we were 2nd last year in our first crack losing to the home team. Finally, this year and on neutral ground, we won.”

As head of the CCC Jungolf program, Neri is all-smiles. “I have received numerous congratulatory texts commending me on a job well done with the junior program because our top scorers were the juniors – Lj Go, Gen Nagai and Gio Gandionco. But I also want to put it on record that I, too, am a player and have a little game myself (hahaha!). Also, guys on the team such as myself, Mark Dy, and Marko Sarmiento come from an older generation of junior golfers and credit should go to the leaders of that era too – Vicky Moraza and Reny Sarmiento.”

Credit, of course, goes to all the team members. These include CCC president Montito Garcia, Eric Deen, Carl Almario and Bayani Garcia.

“The past winners of the PAL Interclub were ‘hired guns,’” said Neri. “Meaning provincial players recruited by Luzon courses to receive monthly allowances and playing privileges on the condition that they will represent their team in the PAL. With our win, we have shown that home-grown players who have a common origin in the junior golf program and have a genuine affiliation with our club rooted from childhood can win. This will not only inspire our team but others as well. Alta Vista and Alabang are among those fielding junior golfers.”

One of the secrets shared by Neri? Let the kids be kids and not give them unnecessary restrictions.

“Two days before we left for Davao, Lj, Gio, and Gen played badminton. During the tournament, we were hosted to a dinner in a house with a spacious lawn and the kids played volleyball and soccer. I don’t subscribe to some who say that other sports are bad for golf. The more active the lifestyle, the more athletic the player… that can only be good for golf. The kids also hit the gym regularly.”

Gio Gandionco, 16, the son of proud parents Opep and Cora, was the final player on the last day. On the 18th hole, he drained a six-foot birdie putt to score an impressive two-over-par 74 (34 points).

“Yes I was a little nervous,” said Gio, who’ll soon move to the U.S. on a college scholarship. “Being the last player has so much pressure, especially on the last hole when everyone is watching your every move. But, I thought, after all the experience I’ve been through, I can handle the pressure. Sinking my birdie putt on the last hole felt great. Even though that putt had not much bearing, I wanted to finish it with a birdie to prove that despite the pressure, I can make it.”

On pressure, Gio adds these tips: “I try to stay calm and breathe. Just take deep breaths, think positive and stay in the present. I try not to think too much and just go over my routine. The only thing in my head is imagining myself hitting the best shot and seeing the ball go where I want it to go.”

Next year? The PAL Interclub will fly back to Cebu. Our last hosting was back in 2001. “This will be a joint exercise with all four clubs – CCC, Club Filipino, Alta Vista and Mactan,” said Neri. “Two clubs will host the seniors event the week before and, the other two, the regular event. We are privileged to have a captain like Montito Garcia who has friends all over, so whenever we travel there are people always inviting us out. Now that we will be hosting it, we look forward to giving back the hospitality. As a team, this win will motivate us to practice earlier and harder than ever.”